This is one of a series of blog entries that will deal with the idea of "thrifty cooking". In these terrible economic times, when people are getting layed-off by the hundreds, we can all save a lot of money by going back to some of the skills our grandparents had in the kitchen. All it takes is a little time and a bit of confidence. I'll show you how to turn an inexpensive cut of meat into three family meals, or how to make the most out of inexpensive pantry ingredients like rice and dried legumes.

Another hunk of meat people sorely underestimate the value of is pork. We all have these ideas that pork is bad for you, is loaded with fat and cholesterol, and, let's face it, many of us had the horrible experience as a child of eating a dried-up pork chop coated in something like shake 'n bake and fried in a pan with oil or butter.

In reality, today's pork is quite lean and very good for you. Remember the marketing slogan, "Pork, the Other White Meat?" That was the National Pork Board telling us that they'd re-engineered the pig through selective breeding so that it, in the words of Timon and Pumba, "It tastes like chicken." It's also nearly as healthy as chicken. What's more, the USDA's latest rules and regulations make sure pork is much cleaner these days, making it possible to actually eat it at a temperature that's still moist or even a little pink (if you're into that thing).

So, why is pork a bargain? Well, there are 3 inexpensive cuts you can squeeze at least 3 meals out of: The Loin (not tenderloin--that's different), the shoulder, and the butt. For this post, we'll focus on just the loin. I'll save the shoulder and butt for another post.

The Loin
Whole pork loins in sealed vacuum packs go on sale at many supermarkets for under $1.99 per pound on a very regular basis year-round. At the wholesale club (BJ's, Sam's, Costco), it pretty much stays at around $1.85 per pound or less. Your average loin is just under 10 pounds, which means you get the entire thing for under twenty bucks. Not a bad deal when you can get 3 or more meals out of it. It's also not a bad deal when you consider that this is the same cut on the pig that would become Filet Mignon on a cow.

You heard me right. This is a prime hunk of meat for twenty bucks and the same hunk from a cow would run you $60 bucks or more at the wholesale club and $32 for a 1-inch slice of it at your favorite steakhouse. The whole loin is about as long as your arm. So what do you do with it?

Disassembling the Loin
First, cut a hole in the packaging and let the juices drain out into a clean sink. Don't worry, it's not blood. It's a protein-filled liquid. Cut the rest of the packaging off and pat the meat dry with paper towels so it's easier to handle. Put it on a long cutting board (or an exceptionally clean countertop).
You'll notice a large cap of fat on the top of the roast. Your first decision is whether to leave the fat on or take the fat off. Some say it keeps the meat juicy. I find it's easier to slice and serve without the fat because there's a piece of tough "silver skin" below the fat that will not melt or soften during cooking. If you choose to remove the fat, use a boning knife if you have one or a sharp non-serrated pairing knife to remove it. 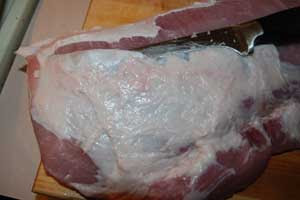 Running up one side of the loin, you'll notice a strip of very fatty meat called "the chain." Cut the chain off and put it aside. 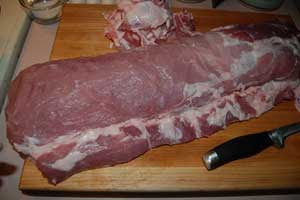 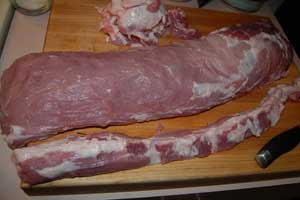 Once you're happy with the loin, start by cutting it into 3 small "roasts". Just divide it into three cylinders of equal length. Each cylinder will be progressively smaller in circumference because the loin tapers at one end. That's okay. Take your biggest one and tie 3 to 5 pieces of food-safe butcher's twine around it about an inch apart with overhand knots (the knot you use to tie your shoes). The objective here is not to win an boy scout badge for your tying skills. The point is to keep the piece fairly round so it'll cook evenly. 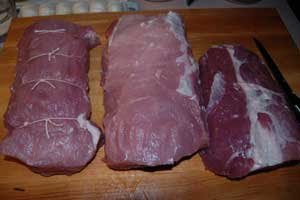 If you want a second roast, do the same with the next largest piece. With the remaining pieces, you can do a number of things:

Cutlets - 1 to 2-inch slices cut from one of the larger cylinders. You see these sold in the market as "medallions" or boneless pork chops at twice the price.

Scaloppini - Cut 1-inch slices and pound them to less than 1/4-inch thin with the smooth side of a meat mallot. Again, you pay more for these already pounded at the supermarket.

Take all of your pieces, wrap and freeze them. You now have 3+ meals. What can you do with them?

Cooking the Roasts
1. Set your oven to 325 and heat an oven-safe non-coated pan on high on the stovetop. Add some oil and wait for it to shimmer but not smoke.

2. Heavily salt and pepper the outside of the roast and place it into the pan. It will sizzle and stick to the pan. Wait 2-3 minutes until the meat no longer sticks to the pan.

3. Rotate it to sear the other side. Keep browning and rotating until all sides are brown and crispy.

4. Turn the heat off and let things settle down a bit. Pour either 1/4-cup of honey or 1/4-cup of maple syrup (even the fake stuff) over the roast. Rotate it once to sop-up the syrup, then put the whole thing into a 350 degree oven.

5. Cook until the internal temperature of the pork reaches 140 if you like it pink and 155-160 if you like it not pink but still juicy. Anything over 170 will taste like sawdust. Take it out of the oven, place meat on a cutting board and let it rest, covered in foil 10-15 minutes. Slice thinly, and serve.

You WILL need an inexpensive meat thermometer for this. I can't give you a reliable time like "so many minutes per pound." It just doesn't work that way. If you still have one of those cookbooks from the 1970's that says cook it to 190, ignore it. You won't die. I promise.

Cooking the Cutlets
For the cutlets, cut them thick and find a recipe that lets you stuff them by cutting pockets in the sides like a pita pocket (spinach and cheese works well). Then, sear them on each side (using the instructions for the roast above) and finish them in a 350 degree oven until the internal temp is 140 for a pink center, 155 for a non-pink juicy center.

Cooking the Scaloppini
Find a recipe for chicken or veal picatta, chicken marsala, chicken parm, or anything else made with very thin pieces of meat and substitute pork for the meat. Usually, these dishes have a nice sauce that goes great over rice or mashed potatoes.

What about The Chain?
The last thing to address is that fatty "chain". This piece makes very good ground pork that can be used for meat loafs, meat balls, pork pies, or sausage patties. A meat grinder, even an old hand-crank model works best. Ask Grandma. She'll probably give you hers. If you don't have a meat grinder, it can be done in a food processor, but it won't come out quite as nice.

1. First, cut some of the excess fat off. Don't go crazy--just make sure we're talking 40% or less fat to 60% meat instead of the other way around.

2. Cut the meat in chunks and run through a meet grinder or pulse in small batches in a food processor until hamburg consistency.

If you're making sausage, ignore my recipe and consult Alton Brown's recipes for sausage on FoodNetwork.com. There's enough fat in the chain meat that you probably won't need to add fatback as instructed in most sausage recipes.