As I mentioned in previous posts, I've always had a small container garden on my third-story balcony. Due to some netting that needed to cover the balcony for bird control issues and the unpredictability of New England weather, I've had moderate results. I'm usually able to get a decent herb box going and I can get most vegetable plants to grow but they end-up rather pathetic in terms of fruit yield. That was, until this year...

This year, I was able to take the netting down and you wouldn't believe how much more sun I get. That, combined with my choice of plants and the rather chilly spring weather has encouraged my plants along and given me a bit of confidence in my green thumb.

Broccoli
I'm proud to say that all of my broccoli plants have tiny little heads growing (not much larger than florets, but they're getting there!). I bought them on a whim, thinking they'd never grow in such a harsh environment smooshed together in a box like that but, well, there you are... 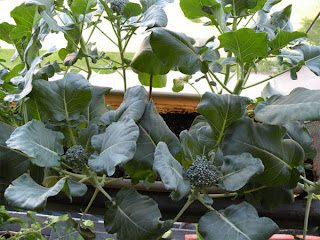 I suspect the added sun and cold weather has helped them along. If it continues this way, I may actually get some full-sized heads. Pretty cool, huh?

Tomatoes
I've tried tomatoes in the past and had terrible luck. The plant manages to grow to a reasonable height, but I usually get 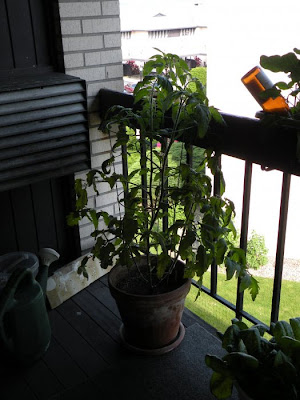 no more than three or four fruits and they never grow large enough or ripen. They really just require too much sun to produce sweet fruits.

This year, I decided to give it one more stab and try cherry tomatoes. To my amazement, the darned thing is growing like a weed and literally sprouts up 6 inches a day. I'm not joking. But wait...here's the best part. Turns out I accidentally grabbed a full-sized tomato plant as opposed to cherry. I'm crossing my fingers and we'll see what comes out.

Lettuce
I've always had fairly good luck with lettuce, but I could never get it to form a head. It grows beautifully and crunchy but the individual leaves just sort of flop-around in the wind. I'm not sure why. This year, I chose "Butter Crisp," a type of bib lettuce, hoping for a better head.

What I got is something that looks like romaine and it too is flopping around in the wind. I don't know if it's just a breed that I've never seen or if it was mislabeled. in any event, I just harvested all of the large outer leaves. I've read that if you do this, it'll actually keep producing. I guess we'll see if that's true. In the mean time, here's tonight's harvest... 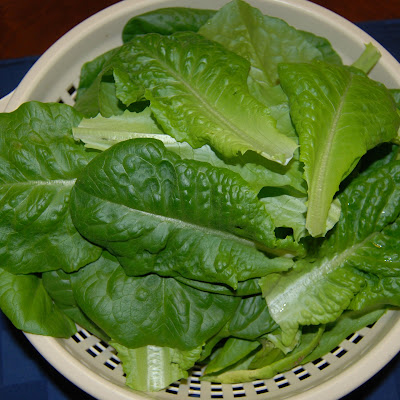 Garlic
Also on a whim, I tried a little garlic. According to the "interwebs," garlic is grown by separating the cloves from an ordinary head of garlic and planting them, pointy-end up, root-end down under 2 inches of soil. Also, according to the "interwebs," you're supposed to plant them in the autumn like you would most flowering bulb plants. Garlic is a part of the lily family, after all (a rather stinky one). That wasn't going to happen.

So, armed with my supermarket bulb of garlic, borrowed from the kitchen, I plunked a few cloves into a window box in the middle of February or March when it was still a bit brisk out. I had no idea if supermarket garlic would actually grow, although I did know it would sprout, as it had on me from time to time if I didn't use it fast enough.

In the end, I'm impressed. I have foot-high shoots of green garlic leaves and they seem to be rooted quite well. It's a complete mystery, until autumn, whether we'll have real bulbs of garlic or not. 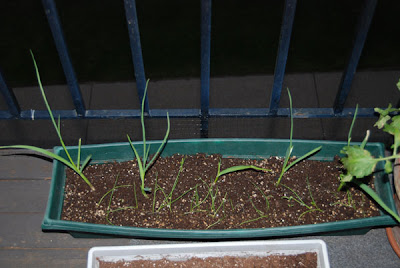 Those little stringy things are actually vidallia onions that I planted by mistake because I forgot I had garlic already maxing-out that box (oops...). I'm thinking I'll yank them when they hit about scallion size to make more room for the garlic heads.

Herbs
My herb box is moving right along. Unfortunately, I kind of skimped with the basil seedlings this year because I never found cheap flats of it. However, the thyme is growing like the weed that it is and smells absolutely fragrant. I have some purple sage plugging along that promises to be delicious and a bunch of parsley that actually made it from seed. I also have a couple of nice rosemary plants that I, once again, would love to train to grow indoors so I can have delicious rosemary potatoes in the colder, "comfort food" months.
Posted by Justin at 3:32 PM