Sometimes, You Just Need a Unitasker... 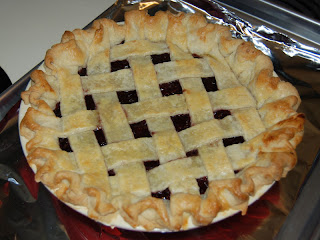 As a longtime fan of Alton Brown, I hate unitaskers--those kitchen gadgets that take up space in the cabinet or drawer and only do one thing with one kind of food and it's a task you do only on rare occasions. There are very few that are actually valuable in the kitchen (like a garlic press). Most can be easily substituted with another tool.

This week, I bought myself a big 'ole bag of Bing Cherries. The idea was to buy a reasonable amount to snack on, but the store tricked me into buying nearly two pounds because they were in those zip-top bags that give you the impression that a) they're in a reasonable-sized bag; and b) you can't split them up into smaller bags. You know the bags. They're the same ones they use with grapes.

Anyway, when it came time to weigh them for checkout, I realized what I'd done but said, "Ahh...I like cherries. I'll get them anyway," and continued on. When I got them home, it became quite evident that I was not going to be able to eat them all and my wife is allergic to them. It was at that point that I decided to pit them and make cherry pie.

Have you ever tried to pit cherries without a pitter? It's one of the very few tools that I don't have in my kitchen. I've never bought one because, well, it only pits two things: cherries and olives. I hate olives and I buy cherries very rarely and part of the fun of eating them is spitting-out the pits (kind of like watermelon seeds).

Several hours later, I have a delicious, from-scratch, home-made cherry pie with a gorgeous flakey lattice top and permanently stained skin under all of my fingernails. It looks like I've been playing in dirt and grease for a week.

Guess maybe, someday, I should buy a cherry pitter. It's really the only tool for the job.
Posted by Justin at 9:51 AM