As an experienced cook, it's always fun when something crosses my desk (or my dinner plate) that's new information. That came this week in the form of a good-sized bag of pickling cukes that I picked up at a local farm stand.

You see, there's this restaurant nearby that makes its own pickles to serve with bread at the beginning of the meal. They're by far the most delicious things I've ever tasted. They're essentially the type of pickle you expect to get with a deli sandwich but crisp and fresh-tasting. I generally eat the entire bowl.

Last year, I attempted to duplicate the recipe and just plain couldn't. I was starting with a basic dill pickle recipe and began adding and removing individual ingredients to try to get that distinct garlicky flavor. I just couldn't do it. Eventually, I gave-in and emailed them for the recipe. I was pleasantly surprised that they were more than happy to give it to me. I was even more surprised to see the secret ingredient listed as, "pickling spices."

That's right. They used a packaged product, and here I was rummaging through my spice rack, assuming the answer was in there. I chuckled, filed the recipe for a future batch, stocked my pantry with a jar of pickling spice, and moved on.

Just the other day, when I acquired the beautiful batch of pickling cucumbers, I pulled-out the recipe, now ready to give it a try. After reading the ingredients a little more closely, I was perplexed. There was *no* vinegar involved. "Hrrrm," I thought. That's typically the case when making sour pickles, a labor intensive process involving fermenting the pickles at room temperature in a brine for several weeks. The natural bacteria in the air causes the production of lactic acid in the brine (as opposed to acetic acid found in vinegar) and pickles the pickles naturally. Eventually, you shut-down the reaction by refrigerating the pickles.

The pickle recipe I had in my hand said "Half-Sour Pickles," which, according to some Googling, are made using the same process, except they're stopped a few days into the process before they become completely fermented. The recipe in my hand did not do that. It called for leaving the pickles on the counter for an hour, then refrigerating them for a week.

Confused, yet not willing to distrust the restaurant's chef, I mixed-up a small batch anyway and did as instructed. The brine smelled exactly like the restaurant's pickles, so I figured that was a good sign. They've been sitting in the fridge for about 5 days now (they require 7 days) and I tasted one. They seem to be working, though not quite there yet.

So what's the deal? After mulling over my research and thinking about the flavor of the restaurant's pickles, I've come to the conclusion that this is a "modified half-sour pickle." You see, real sours and half-sours are made with a brine, a combination of water, salt, and flavorings (in this case, garlic and pickling spices). The brine provides flavor and the right conditions for the natural bacteria to do its thing. To make half-sours, you'd leave them to ferment for up to 3 days. For full-sours, you'd let them go 1-2 weeks. The scary part is that this whole process is a balancing act of letting the "good bacteria" do its job while attempting to keep the "bad bacteria" (the kind that'll make you sick) out of the brine. Since most people are not lab scientists, making sour pickles at home is a bit like playing Russian roulette, except with better odds unless you know what you're doing.

In this case, the brine was the same but there was no fermenting period other than the hour spent on the counter "loosely covered". According to my research, even if we assume a few lonely bacteria got in there during that hour, the bacteria slow-down and don't really do much when exposed to refrigerator temperatures. So how, exactly, are my pickles pickling?

What I think is happening is they're not actually pickling. That is, they're not converting to pickles as a result of acid. Instead, they're being brined--preserved with salt and absorbing the flavors in the liquid. That would explain the lack of pungent vinegar taste. It's possible that there's a little acid production going on, but probably not very much. 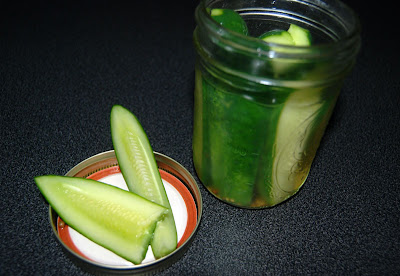 1 ½ teaspoons pickling spices (Such as these)

Fill jars with washed cucumbers. Pack them in tightly. Mix salt, garlic, pickling spices and pepper in a bowl with about 2 cups of hot water; stir until the salt is dissolved. Add some cold water until the liquid feels comfortable to the touch, not hot. Add to the cucumbers. Add more water (warm) if necessary to fill the jar. Let stand on counter, loosely covered, for about 1 hour. After 1 hour cover tightly and refrigerate for 7 days. Taste on the 7th day.

All ingredients can be purchased at any market. You may vary the recipe to your liking or size of jar. Pickles do not keep very long since there are no preservatives. Enjoy!