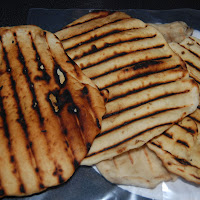 If you've ever been to an Indian restaurant, you've probably tried Naan...a soft, buttery, wonderful flat bread, often with inclusions such as scallions and meat, that one uses to soak-up creamy sauces or temper the palate from the rich spices in-between bites. If you haven't been to an Indian restaurant, you've probably still been exposed to the recent addition of various flat breads to menus of chain restaurants around the US, many of which have their roots in Indian Naan.

Real Naan is made soft through the use of yogurt, is a yeast dough, and is cooked in an Indian tandoori oven. I dunno about you, but I don't have a tandoori oven and I rarely think about dinner far enough in advance to make a yeast dough and let it rise. Never fear! There is a solution.

Kenji, one of the fantastic authors over at GoodEater.org came-up with this fantastic recipe for 30-minute Naan. I've tried it and it's quite fabulous and every bit as easy as he makes it out to be. He adapts the recipe to work on a standard grill (gas will work just fine) and uses baking powder and some light kneading to approximate the effect of the yeast. Give it a try! You won't regret it.
Posted by Justin at 6:25 PM