Everything But the Oink

There's an old saying about pigs and how you can use, "Everything but the oink," (or everything but the squeal). The saying refers to the idea of taking advantage of 100% of the food we raise, leaving as little waste as possible. Whether it's a pig, a cow, a chicken, or farm-fresh vegetables, the more of the item we use and the less we throw away, the better we're doing for ourselves and the environment. The Native Americans knew this better than just about anyone.

Yesterday, I tackled 20+ pounds of apples that I picked last week and I can truly say that I feel fantastic about having sucked as much out of those apples as I possibly could. It took a few old-school cooking techniques (like using a "ricer") and it was a challenge, but what a great feeling now that I'm done. Here's what I made: 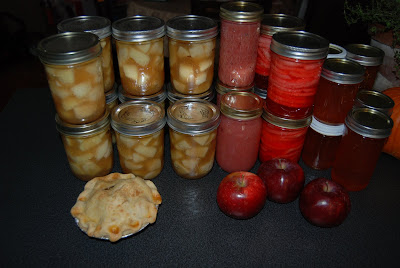 The applesauce was made by boiling the skins, cores, and other discarded pieces of apples down untill they were soft and then mashing them through an old-fashioned ricer. Because the red skins of the apples contributed their red color, the sauce has a beautiful pink hue. 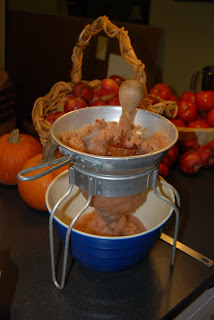 In the end, I was left with a small pile of actual skin, seeds, etc. that weighed just 2 pounds 9 ounces. That's 2% or less of the original apples, which I think is pretty fantastic. 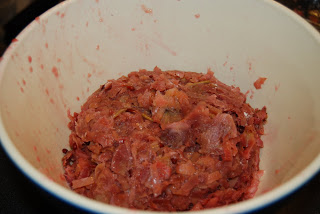 Since I don't have a compost pile, the final remains were sent down the garbage disposal in hopes that they will once again join the environment and help things to grow, depending on how my city processes waste.
Posted by Justin at 2:00 PM

Labels: Jams and Jellies, Storing and Preserving, The Seasons