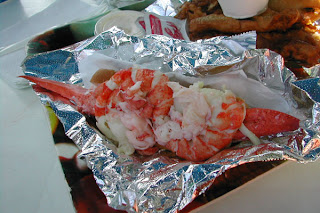 Every so often, a local restaurant or a Mom & Pop joint creates a dish that becomes legend. It's either "the biggest" or "the spiciest" or thought by just about everyone to be "the best" (there are always one or two who disagree). Red's Eats in Wiscasset, Maine did this when they developed what the late owner, Al Gagnon, called "a proper lobster roll."

Al knew, as most Mainers do, that the lobster roll is about the lobster and the bun. Nothing else. It's not about the dressing, the seasoning, fancy toppings, or even lettuce. He knew that a proper lobster roll is made with a New England-style hotdog bun (the ones with flat sides), buttered and grilled on a hot griddle, and filled with enough chunky lobster so that you can barely pick it up to eat it. He knew the lobster had to be fresh, not frozen, and naturally sweet. To settle the argument of a dressing, Al served each sandwich with a choice of drawn butter or mayo on the side (or both if you like).

This perfect Maine lobster roll became legend and is now a top tourist destination in historic Wiscasset, Maine, along scenic route 1. As you cross into the town and begin seeing the signs of a classic New England seaside village (proudly on the national historic register since 1976), there's Red's Eats, a small, fire engine red "seafood shack." In any other picturesque town of its caliber, the building would look out of place--an eyesore amongst beauty. Yet for some reason, Reds seems to fit right in. Wiscasset wouldn't be the same without it.

The line is long, sometimes stretching around the building and back an entire block to the train tracks and the waterway behind. In the dead of summer, you could wait up to an hour for your sandwich. But it's worth the wait. Even though Al himself passed away last year, his daughter works the takeout window in his place, waiting on just one customer at a time and giving each her best smile and a dose of Maine hospitality. While this may seem inefficient, it somehow works out and oddly allows each customer to find a seat in the small outdoor dining area once his or her order is called. Don't dare have a family member save a seat until your order is placed. You'll just interrupt the delicately balanced rhythm. 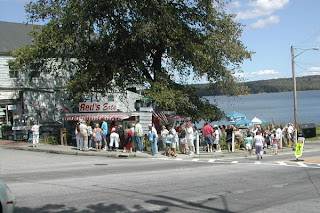 And did I mention the lobster roll? Over a whole lobster in every sandwich, sweeter meat than you've ever tasted in your life. Much of it is caught in the waterways just behind the shop.

Michelle and I made our annual pilgrimage to Red's this year as part of our first anniversary getaway to Maine. We weren't disappointed. It was every bit as delicious and carefully prepared as if Al had done it himself. In fact, his daughter even went back to the girl making the sandwiches to add a few pieces to Michelle's sandwich because she knew it wasn't quite right.

Next time you're visiting coastal Maine, stop by Red's and have yourself a proper lobster roll. I promise you won't regret it. They're open seasonally, this year until Columbus day weekend. They don't have a website, but this blog is about as good as one and contains all the relevant info and a link to a great YouTube video of an interview with Al himself.
Posted by Justin at 5:06 PM