Iron Chef (No, Not THAT Iron Chef)

There's a small consignment shop adjacent to the laundromat that my wife and I use and I periodically wander over there during the dry cycle to poke around. My wife hates these types of places, claiming that, "they're just filled with someone else's junk," but I come from a family of packrats and handymen who just love to see what treasures lie beneath the dust.

On a recent expedition, I happened upon a slightly rusted and beat-up cast iron casserole dish. It was oval in shape with decorative handles on each end. I've never seen anything quite like it as most cast iron pans today are in the familiar frying pan or pot shape. This one intrigued me because it was essentially a casserole dish that could be started on the stove top--not something most casserole dishes could do. So, I snatched it up for less than ten bucks (a true bargain) and brought it home in a brown paper sack...much to the chagrin of my wife. I then pondered its restoration. Here's a "before" shot: 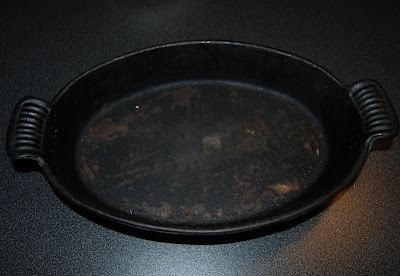 Cast iron is one of those culinary topics that people can be very passionate about. Some avoid it, assuming it's old-fashioned and antiquated--something that Grandma used in the days of old before newer and better cookware was invented. Others swear by it and lovingly care for their collection of iron cookware in the way car fanatics care for high-performance rare collectors edition vehicles. Those people claim that absolutely nothing outperforms cast iron, use nothing but cast iron, and will challenge your best, most expensive anodized nonstick frying pan to an egg-frying duel any day of the week.

I'm not quite *that* passionate about it, but I am gradually understanding why cast iron cookware is making a comeback. For one, a well-seasoned, well cared-for pan can be truly non-stick and gives Teflon a definite run for its money. In a day and age when people question the health risks of Teflon and similar coatings, that's a good thing. More on my thoughts about that issue in a later post.

Secondly, nobody can argue the fact that iron holds heat well and evenly distributes it much better than just about any stainless steel pan out there. It takes a bit of time to learn to control the heat, especially with an electric stove, but it works quite well once you get the knack of it. In fact, it can even make-up for the uneven heat often produced by electric burners when using extra-large pans. We're talking evenly browned pancakes, folks. The holy grail of breakfast.

Third, cast iron can go from the stove top right into the oven and back again. It's not recommended that you do this with coated pans because the coating can break down at high temperatures. This stove to the oven technique is the secret to how professional chefs everywhere serve-up delicious seared meats that are perfectly done in the middle. I personally like that it's both a frying pan and a baking dish at the same time.

One of the more intriguing things about cast iron is its ability to be an heirloom. It lasts virtually forever and some families have passed perfectly seasoned pans down for generation upon generation. That's the best way to get your hands on one. However, we don't all have that luxury, so we have to look at other methods.

The first is buying a new pan and seasoning it yourself. Lodge Cookware, one of the very few remaining cast iron cookware producers in this country, makes "pre-seasoned" pans now. While the factory seasoning (a chemical process) will never stand-up to Grandma's heirloom piece, it does get you on your way to a proper seasoning much quicker than if you had bought a raw, unseasoned pan. Using a "speed seasoning" method on top of that such as coating the pan with shortening and baking it at a high temp for awhile can further help it along.

A second way is to troll antique shops and yard sales. Many people have old, beat-up cast iron pans lying around their basements. They're often rusty and/or have chips in the seasoning and other "crud" in the nooks and crannies. While the former owners probably chalked these up as junk, antique dealers know that in the hands of a true believer, they can be brought back to their glory days and snatch them up. You can often get your hands on one of these cheap like I did.

So how do you repair a cruddy yard sale pan? There are different methods, but I used a combination of hot water, coarse salt, and oil or shortening to scrub most of the rust and crud out. I further evened-out the bottom of the pan with a Brillo or SOS pad (or a fine steel wool pad). That left me with an even yet mostly unseasoned bottom to contend with. After washing and drying thoroughly, I heated the pan a little and added a tablespoon or two of cooking oil and "burnished" it in with a paper towel.

This "burnishing" process is something that took me a long time to understand. Essentially, you're rubbing the oil into the surface of the pan and the baked-on blackness (seasoning) that's already there, adding to that "seasoning". When you're done, the pan should be shiny but not really greasy. If it's greasy, all that will happen is the grease will go rancid during storage and give your food off-flavors the next time you cook.

A well-seasoned pan is nearly as good as the best non-stick coated pan. And, contrary to what most fanatics will tell you, they can stand-up to a good washing too with a non-abrasive scrubbing sponge and liquid dish detergent. Just make sure to dry it thoroughly and burnish it with oil immediately after washing to preserve the seasoning and avoid rust. Coat the bottom too, as it has a tendency to rust easily.

So, how about my rusty old cast iron casserole? Here it is, all fixed-up and ready to start developing a new finish: 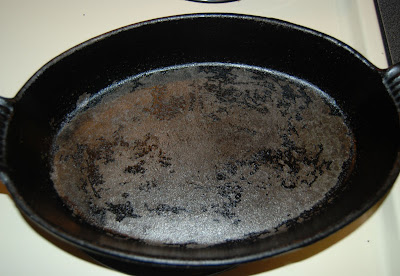 I used it to bake some fish the other night and it worked fabulously. I can't wait to try searing a small roast or piece of steak and then finishing it in the oven. That and maybe some delicious roasted potatoes and root veggies. Yum!
Posted by Justin at 11:42 PM