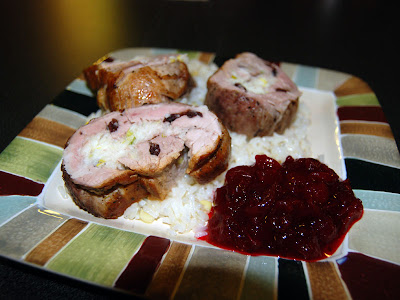 The other day, I happened upon a great deal for Pork Tenderloin and picked-up two. My usual recipe for that cut of meat is to sear it on all sides, dump 1/4 cup of honey mixed with a pinch of cayenne over it and finish it in the oven. It's an excellent, fast, easy recipe but one gets tired of it after awhile.

Unfortunately, most recipes for pork involve apples. It's, of course, a great pairing, but my wife is allergic to apples. During a recent trip to Maine, I had a meal where the chef had taken the pork tenderloin and created a potato-based stuffing for it. If you can find a way to stuff mashed potatoes into anything, I'm all for it.

Below is my version of the recipe. We had it for dinner the other night and it was delicious. I highly recommend it. For the most part, it's easy to prepare and you'll look like you were slaving all day in the kitchen.

Cranberry-Studded Potato-Stuffed Pork Tenderloin
This recipe was inspired by Chef Moe at the Pinecrest Inn. She served a similar potato-stuffed pork tenderloin on her Autumn menu and I thought it was absolutely delicious.

Notes:
- This will work with smaller tenderloins but you may wish to serve 2
- This will work with a small pork loin roast as well
- Sour cream can be substituted with buttermilk, yogurt, half & half, cream, or milk
- Other dried fruits such as raisins, currants, chopped apples, or apricots may also taste good
- If you don't have a skillet or other pan that can go from cooktop to the oven, sear the roast in a large frying pan. Transfer to a glass baking dish when placing it into the oven.

Make the Stuffing
1) Peel potatoes and cut into large cubes. Boil in water until fork-tender.
2) Mash potatoes thoroughly or press through a ricer.
3) Stir-in sour cream.
4) Season with salt & pepper and stir-in parsley. Taste and adjust seasoning.
5) Put stuffing aside to cool.

Make the Pork
1) Preheat your oven to 300 degrees.
2) Unwrap the pork and pat dry. Using a sharp boning knife, remove any fat and the tough silver skin from the top of the meat. Try to remove as little meat as possible.
3) Place cranberries in a small bowl with enough water to cover them. Heat in the microwave on high 1 1/2 minutes until the water is hot and cranberries have plumped-up. Drain thoroughly.
4) Using a sharp boning knife (a sharp pairing knife will do in a pinch), gently make a 1/4-inch deep slice into the meat going the long way. Using shallow slices and working slowly, continue to cut the meat so it will unroll like a jelly-roll and so that it is roughly a uniform 1/4 to 1/2 inch in thickness.
5) Using the tip of your knife, cut a series of small pockets in the thickest sections of the meat. Stuff each pocket with 1-3 cranberries. Continue until all cranberries are used.
6) Using a rubber spatula, spread the stuffing mixture over the unrolled meat, creating a uniform layer of about 1/4-inch.
7) Roll the pork back up jelly-roll style, taking care not to squeeze the stuffing out.
8) Tie the roast with kitchen twine using a series of rings of twine about 1-2 inches apart down the length of the roll. Don't pull too hard on the knots or you'll just squeeze the roast out of shape and lose stuffing.
9) Generously season the meat on all sides with salt and pepper.
10) Heat a large oven-proof skillet on high with 2-3 tablespoons of olive oil. When oil shimmers, place the roast into the pan with a pair of tongs. Allow the roast to brown well on one side before turning. Continue turning and browning until all sides are brown.
11) Position the pork seam-side down in the pan and move it to the oven. Bake until the internal temperature reaches 155 degrees on an instant-read thermometer. Remove and let the roast sit 5-10 minutes. It should continue cooking another 5 degrees or so. Cooking beyond 160 will dry the pork out.
12) Remove twine, slice into thick slices and serve. 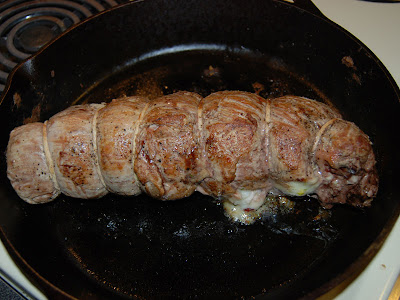 Note: Photo at the top depicts pork served over buttered rice with sweet baby corn and a side of home-made cranberry sauce.
Posted by Justin at 3:19 PM