A few years ago, the New York Times published Jim Lahey's No-Knead Bread recipe and it caused quite a ruckus in the food world--especially amongst home and hobbyist cooks. Why? With Jim's unique recipe, home cook's could turn-out authentic artisinal breads with very little work in their home kitchens that rival those made at a professional bakery. The recipe is incredibly easy and generously forgiving, which what is so appealing about it. Unfortunately, it does require a lot of forethought because you trade the hard work of kneading for 18 hours of fermenting time.

For my birthday, my wife bought me Jim's new book, My Bread, and last night, I made my first loaf of Jim's ciabatta. Honestly, it tasted FANTASTIC--as good as any I've ever purchased. And other than time, it took nearly no work! 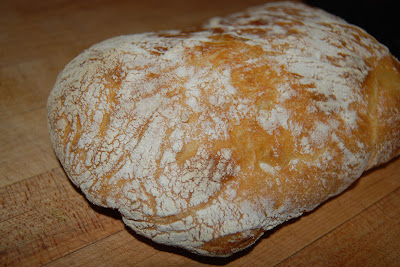 How does it work? This recipe is food science at its best. There are several components:
I love making bread. It's such a comforting activity and one that really makes me feel as if I've gotten back to basics. Modern supermarket bread is really an example of how even the most simple, basic foods in our diet have gotten away from their roots.

Do you ever make your own bread? What's your favorite kind? Do you use a breadmaking machine or do it old-school?
Posted by Justin at 9:25 AM