Last week, I was prowling about the farmer's market and I happened upon a table that was selling stalks of locally grown popcorn. I remembered reading a post over at the Chiot's Run about growing popcorn I'd been intrigued. I'd never put much thought into how the dried little kernels made it from a stalk into the package. So, I snatched-up a few stalks. 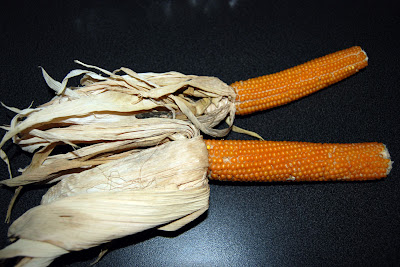 As I paid the woman, I asked if there was anything special I needed to know about popping them.

"Oh, you just scrape them off," she said as she mimed a scraping motion, "and pop them in a pot with some oil like usual."

As it turns out, popcorn starts its life much like sweet corn. The farmer then pulls the husks back at the end of the season and allows them to air-dry on the stalk, hoping birds don't start treating the field like their own personal buffet. 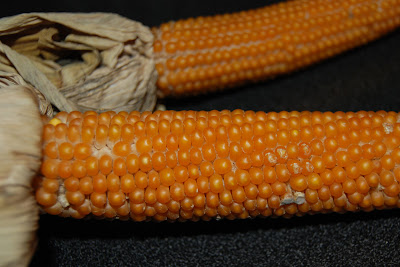 As it also turns out, the scraping of the kernels is not quite so easy as the woman made it sound. Well, not all that easy in a condo, at least. As you scrape, either with your fingers or something like a knife, the kernels pop out and probably a quarter of them land everywhere but in the bowl. I'm still finding them all over the dining room. :-) 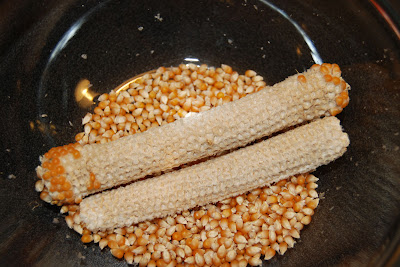 I now have a small container of tiny kernels sitting in the pantry, waiting for a a good movie to arrive from Netflix. I'll be sure to post some photos of the popped corn when we get around to making it and let you know how it tasted. 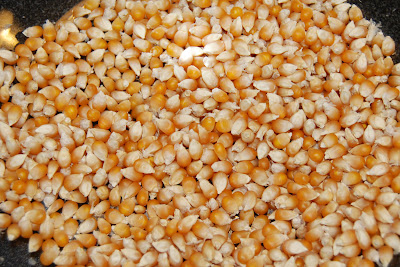