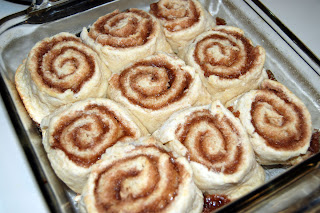 I think we all have memories of Saturday mornings at home. Maybe yours is about the cartoons. Maybe a special family member visited every weekend bearing pastry. Or, maybe it was just a time to roam about the house in your bathrobe or PJ's, cup of coffee, tea, or hot cocoa in-hand.

Of course, with me, it was the food. I know. Big surprise. :-) But Saturdays were a day when Dad would often take-over the kitchen and make us non-weekday treats like homemade waffles, pancakes, french toast, or cinnamon rolls. Mmmm... Cinnamon rolls.

Real cinnamon rolls and sticky-buns, of course, involve yeasted dough and a long slow rise. That's why most of us won't tackle them for breakfast. It requires a lot of work and a good deal of forethought. However, we used to make a recipe that was on the back of the Bisquick baking mix box (or the Jiffy Baking Mix...I'm not entirely sure). They're made with a basic rolled biscuit dough and they can be out of the oven in less than 15-20 minutes. I thought I'd share the recipe with you today.

1) Heat the oven to 350 degrees. In a large mixing bowl, stir the flour, baking soda, and salt together until well blended.
2) Dice the butter and work into the flour mixture with your hands until the butter is in the size of small peas.
3) Pour the cold milk into the bowl and mix gently just until it combines. It's better to under-mix than to over-mix.
4) Dust a clean countertop with flour and scrape the dough onto the counter. Fold-over 3 to 5 times to get a uniform dough. Do not knead.
5) Using lots of extra flour as needed, roll the dough into a rough rectangle on the countertop.
6) In a separate bowl, mix the butter, sugar, and cinnamon to form a paste. It should be spreadable like wet sand. If it's too soupy, add more sugar.
7) Spread the cinnamon mixture evenly on the dough, working it as close to the edges as you can.
8) Gently start rolling the dough up jelly-roll style from the bottom, working your fingers from left to right along the roll so you don't tear the dough.
9) Turn the roll to seam-side-down. Slice into 9 equal pieces, discarding the skinny ends that you'll have unless you rolled-out a perfect rectangle.
10) Grease an 8x8 pan with cooking spray, shortening, or butter. Place the rolls, sides-touching in the center of the pan.
11) Bake at 350 degrees for about 15 minutes or until the tops begin to brown and they appear cooked-through when poked gently with a skewer or a fork.
12) Remove from oven and let cool 5-10 minutes before serving.

The Cheat Method: Use the recipe on the side of a box of baking mix (such as Bisquick or Jiffy) to make the dough. Follow the rest of the recipe to roll, shape, and bake the cinnamon rolls.

Optional Icing Topping: Mix 1 1/4 cups powdered sugar, 3 tablespoons of milk, and 1/2 teaspoon vanilla extract together until it is well combined, lump-free, and soupy. Drizzle over still-warm cinnamon rolls. Feeling adventurous? Use orange juice or some other flavored liquid in place of the milk.

Nuts: If you like, sprinkle 1/2 cup of finely-chopped walnuts or pecans on top of the cinnamon mixture before rolling-up the dough.
Posted by Justin at 10:35 AM