Each day, I drink a large cup of tea. And I'm not ashamed to say that I like it sweet. In my 16-oz cup, you'll generally see me shovel in 2-3 teaspoons of white sugar to get it just right. Some people look at it as a sign of weakness. I don't. I see it as a perfectly made cup of tea. You drink your tea your way, I'll drink mine my way.

That said, I also know that my family has a long history of sugar problems and I have a long history with weight issues that I really need to start keeping in check. That said, scoops of fine white powder dumped into my morning tea just isn't a great idea long-term. I've tried all of the commercial sweeteners, unimpressed with the funky chemical after-taste. About the best one I've tried so far is Truvia, one of the new stevia plant based sweeteners, but I still find that it ruins the flavor of the cup of tea that I've grown to love. And I don't subscribe to the, "Oh, you'll get used to it," argument. I don't believe in getting used to something you don't like. What's the pleasure in food if you have to eat stuff you don't find appealing?

Recently, I decided to research and try Agave Nectar: 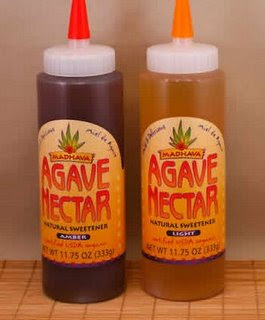 I've seen agave nectar in the store (usually near the breakfast syrups) and have always wondered about its health benefits. After a big of Googling, I've found that it's made from a succulant plant that looks a lot like an aloe, it's supposedly sweeter than honey, and the main health benefit is that it affects blood sugar levels less than just about any natural sugar sweetener on the market--less than honey or corn syrup. Figuring, "What the heck?" I gave it a try.

First, it's pretty neutral in flavor--something you don't get often in syrup sweeteners. I don't know that I'd personally call it sweeter than sugar or honey, but I can get away with about three good teaspoons of it in my big cup-o-tea. For the most part, it doesn't impart much of its own flavor. There's a very slight vegetal note that comes through more like a tartness, but that's not entirely unpleasant in tea.

All in all, I like it and I think I'll keep using it. If you're looking for something natural to put in your morning hot beverage or to drizzle on toast or pancakes, give Agave a try. I recommend it.
Posted by Justin at 10:57 AM