We're starting to get settled in the new house and I've found a few more garden surprises.

This little tulip is the only one that seems to have survived the disheveled flower beds, the animals, bugs, and the prior owner who, I'm told, came back to steal some of the plants from the yard after being booted from the home by the bank. 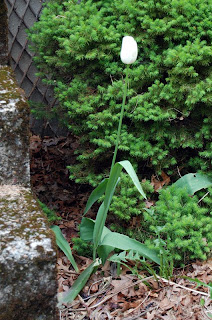 Unfortunately, the front beds are such a mess that it's hard to tell what's a weed and what's a plant.  I can either leave them a mess and see what blooms and what doesn't (or what looks like a decorative plant and what doesn't or I can just pull everything, turn-over the soil, and start anew...waiting to see what made it through my disruptions. 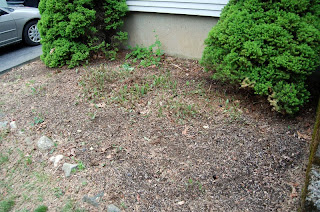 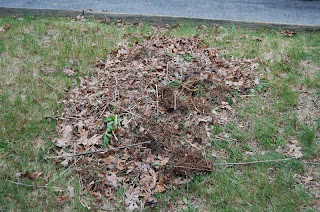 My mother, who admittedly is not a gardener, correctly identified this bush as, "One of those blue and purple flower bushes."  Upon a closer look at the leaves, I confirmed that she was correct...it's a hydrangea, though I don't know what color.  I've always wanted one, so I'm quite excited.  If it's the kind that can turn blue, my understanding is that you can control the color by altering the PH of the soil. 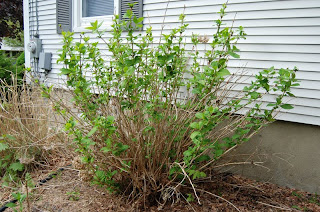 My neighbor tells me this monstrosity is some sort of ornamental grass that dies off and turns this straw color.  Not so sure about the fluffy-looking flowers but I'll trim it down and see what comes up green.  Maybe it'll be pretty. 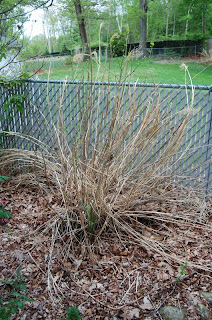 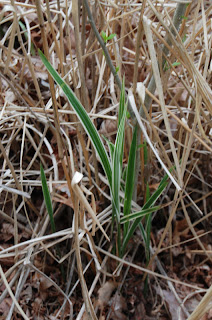 Wondering what the heck an odd-shaped bed could have been (looks more like a grave than a bed), I bent-down and noticed some familiar looking foliage.  I tugged on one, uprooted it, smelled it, and sure enough, it appears to be carrots.  My guess is that this was a small vegetable garden and the carrots (or parsnips...not sure) self-seeded themselves.  I'll be careful to leave them when weeding to see if they do indeed form full carrots. 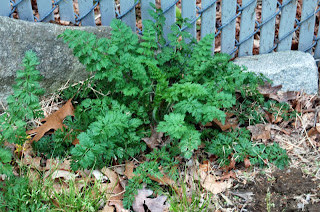 My sister's boyfriend tore-back a bunch of ivy that was taking-over the vinyl siding and deck here.  While ivy is pretty, it can be a very damaging to buildings and I don't want it anywhere near the house.  Perhaps, if I can find the main stem, I'll transplant it near one of the fences and see if I can train it properly and non-invasively. 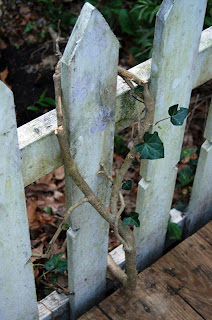 I'm told these are day lilies.  Not a huge fan of lilies in general (except for lily of the valley), but I'll go with it and see what comes up. 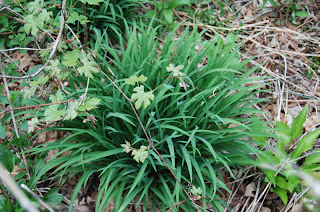 This "flock" is in a rather odd place.  It just so happens that my wife would like to repair the 4x4 wall along the driveway and plant flock to hang over it.  I'm thinking that's a great idea and hopefully, we can move some of this one rather than buying it. 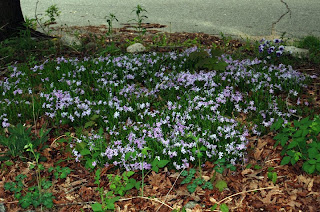 And last, but certainly not least, we found this vine, which looks suspiciously like grapes!  I've been talking non-stop about putting in some fruit trees/bushes and nothing smells more fantastic in the autumn in New England than ripening concord grapes.  I hope that's what these are and I hope I can find the base of the plant so I can relocate them (they're currently competing with the ivy for the picket fence garden). 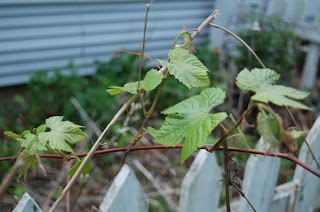