As a housewarming gift, my parents arrived one day with a brand-new chest freezer.  When we lived in the condo, this just wasn't an option due to space and quite frankly, that's why I got into canning--it was the only way to buy or cook in bulk and preserve the results without extra freezer space.

So the other day, I made one of my routine trips to the wholesale club and explored the wealth of new items I could now buy because I had cold storage for them.  I'm almost ashamed to admit this, but my shiny new freezer is now home to this: 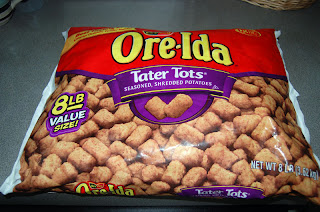 Yes, that bag says EIGHT POUNDS and no, we won't be eating them all at once.

With all of the discussion about obesity in America, poor quality school lunches, and other related topics lately, our good friends the Tater Tots are suddenly being looked at with a permanent scowl.  In fact, I'd rank it up there with the treatment McDonalds got shortly after the "Supersize Me" documentary was released.  And that's a shame because it isn't the Tater Tot that's making America obese.  It's our personal choices.

There's nothing wrong with a little junk food now and then.  Whether it's Oreos, Tater Tots, Frozen Pizza, Full-Fat Ice Cream, or whatever your personal vice is, it isn't inherrantly bad if it's thought of as a periodic treat.  None of these products are really meant, nutritionally at least, to be foods consumed as 90% or more of your daily diet.  It's something called "moderation" and it's a concept our grandparents understood and were taught from a young age.  Then again, our grandparents weren't exposed to the kind of mass-media marketing we are today and they had a bit of a slower lifestyle and less discretionary funds.  They also raised their families back when it was practical to roast your own potatoes for 2 hours in the oven for a weeknight meal.

We'll be storing this gigundo bag of greasy potato treats downstairs in the bulk freezer and I'll be bringing up handfuls at a time to store in quart-sized bags in the main freezer or in portion sizes for dinners.  And we won't be eating them more than once a week--probably even less frequently.  Heck, everyone loves to take an extra-crispy Tater Tot, dip it into some good old American ketchup, and devour it.  There's nothing wrong with that.  It just doesn't have to be done 4 out of 7 days a week and served alongside fish sticks or commercial chicken nuggets.

By the way...  If you really want to feel better about the ketchup thing, Heinz makes an organic version of their ketchup that's absolutely fantastic.  Not only is it made from organic tomatoes, but it has no high-fructose corn syrup and it tastes almost identical to the real thing.  I guarantee your kids won't know the difference.  And, you can always serve your Tater Tots with homemade oven-baked chicken tenders and a side of steamed veggies, fruit juice, or quick and easy homemade microwave applesauce.
Posted by Justin at 10:27 AM