Greek-style yogurt is all the rage as of late. And why shouldn't it be, for all it's extra-creamy goodness?  What I don't like, though, is its premium price tag and I'll bet you don't either.

The fact of the matter is that there's nothing all that different between Greek Style yogurt and a quality American yogurt except for the fact that it's a little thicker--something achieved by straining out some of the water.  That is, of course, assuming that your choice of Greek yogurt isn't imported from Greece or made from sheep or goats, or something other than a cow.

Here's the awesome part though...you can make your own and save some cash and it does not require any specialized equipment or knowledge akin to cheesemaking.  Here's how you do it.


First, buy yourself a large container of quality yogurt.  If you like organic, by all means, indulge.  If you're partial to store brand, that'll honestly work just fine.  Full-fat will yogurt produce a decadent product akin to whipped sour cream (which I can testify is FAN-Friggin-TASTIC), but low-fat or nonfat is probably a more sensible choice if you're planning to eat this everyday.  Also, if you're into the whole "probioitic" thing, you can look for one with "active yogurt cultures".

(Okay, so the graphic was shamelessly borrowed from Stonyfield because I forgot to take a photo of my container of cheapo store brand.  Hopefully, they won't sue me cause I'm giving them free advertising). 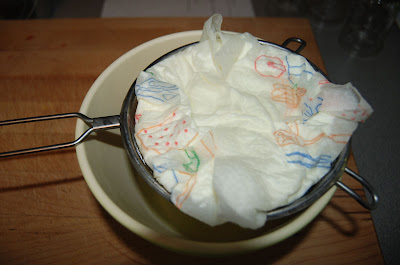 Next step, cover it loosely with some plastic wrap (optional), stick it in the fridge, and walk away.  While it's sitting there, moisture will begin to weep out of the yogurt and into the bowl.  How much depends on how long you leave it in there and how much fat the yogurt had in it.  I've found that nonfat drains much faster...sometimes in as little as 2-3 hours.  Overnight will give you a thick cream-cheese consistency (more on that later). 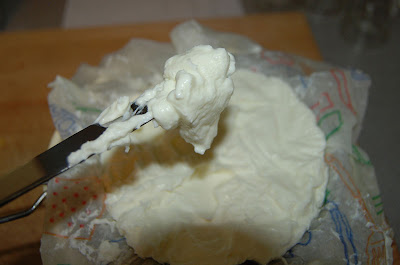 As you can see, I let this one go a little bit long and I ended-up with a spreadable consistency.  This is not necessarily a bad thing.  Add some herbs or some honey and walnuts or cranberries and slather it on a bagel.  However, that's not what we're after.  We want Greek yogurt.  See the water in the bottom of the bowl? 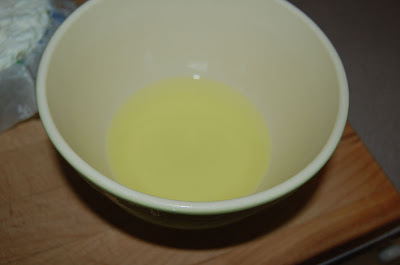 If you did what I did and went too far, add some of the water back in a spoonful at a time till it thins to the consistency we're looking for.  Alternatively, add a flavorful liquid like orange juice.

Now, I don't know about you, but I hate plain yogurt and one of the things I like about the Chobani brand of greek yogurt is the "fruit on the bottom".  So let's doctor this up a bit.  First, put your yogurt back into the original container (or if you threw it out like I did, find a suitable container in your kitchen).  Squirt in a couple tablespoons of honey. 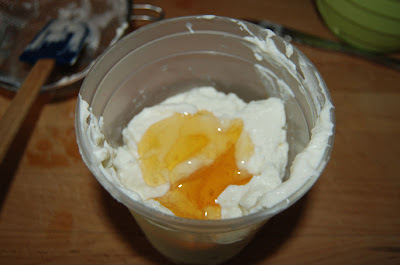 If you don't like honey, some maple syrup, corn syrup, or agave nectar would also be appropriate.  Plain sugar won't melt in--if you want that, you'll need to make simple syrup.  Honey is easier.  If you're looking for vanilla yogurt, add a teaspoon or two of vanilla extract--and yes, the fake stuff is fine.  Stir well. 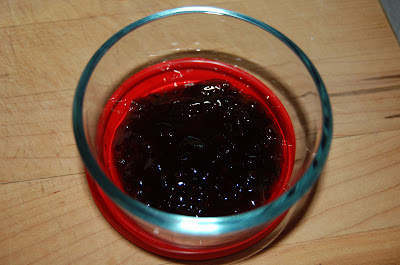 In a suitable serving bowl (like the one above), add a tablespoon of your favorite preserves.  Looser preserves work better here than firm ones.  You can loosen store-bought preserves by adding a little water to it and microwaving on low for a minute or so.  After the preserves, pile-on the yogurt. 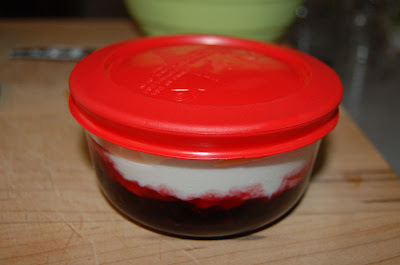 What about the Nutrition?
Nutritionally, you're probably looking at similar to the manufactured stuff.  Here's why...  When you take water out of a product, you're concentrating everything else that was already there.  This means that strained yogurt is going to have more protein, fat, calories, calcium, etc. than a same-sized portion of its American cousin.  The same applies if you make it yourself.  On the other hand, zero concentrates to zero, so nonfat when you start will be nonfat when you're done--keep that in mind when making your choice.

What I like the most is that I know what's going into it because yogurt is yogurt and you can always buy all-natural farmstand jams.  With the prepared cups, not so much.  I'd wager most of them are more akin to pie filling (which wouldn't be such a bad idea from a dessert perspective...maybe even some chunks of graham cracker).

So go ahead and mix yourself up a batch of easy Greek-style yogurt on the cheap and enjoy.
Posted by Justin at 10:58 PM