The Importance of Keeping a Garden Journal

For a few years now, I've been meaning to start a garden journal.  There are many reasons to keep one, most of which have to do with not screwing-things up as I often do.  :-)

Reason #1 - Knowing What You Planted
I have a tendency to plant multiple kinds of seeds per tray.  When the seeds start to sprout, people will ask me, "What's that?" to which I answer, "Hmmm...I don't know."  This year, I got smart (or so I thought) and drew a diagram on index cards.  I even marked the direction of the trays so I'd know the proper orientation (take that, Martha Stewart...ha!).  Unfortunately, when we moved, the cards got packed, "in a safe place," and well, they're so safe even I can't find them.  Had I drawn the diagrams in a journal, I'd probably have had a better chance of finding them.

Reason #2 - Paper Remembers Better than You Do
Even when I think I remember what I bought, I sometimes don't.  This year, I swear I bought pickling cuke seedlings from the farm in town.  Serously...I really really thought they were pickling cukes. 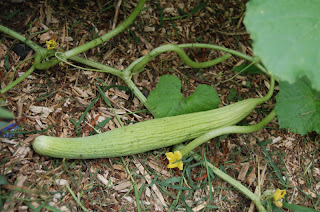 Okay, that so does not look like a pickling cuke.  I checked the tag too and all it says is "cucumber," which isn't all that helpful.  Judging by the size and skin pattern, I'd say we're going to have a bumper crop of English Cukes.  Still good, but not exactly what I thought I bought.

Reason #3 - You'll Know What Works...Next Year
By logging what exactly I bought, where I got it, where I planted it, and how it grew, I can look back at the journal next year when planning the garden.  I learned this trick from Susy over at Chiots Run.  Not only do you want to remember what to plant but you'll want to remember where it grows best and even where not to grow it next year if you're practicing organic crop rotation.

Reason #4 - You'll Know How Much Money You Saved (or Lost)
This year, I'm bound and determined to log the weight and quantity of every item I pick.  I'm hoping that after the harvest season I'll be able to add it all up and feel good about how much of our food I've grown and get a rough idea of how much money we may have saved.  Next year, I think I'll also add-up the cost of the seeds, seedlings, and gardening equipment so I can have a good idea of how much it cost us. 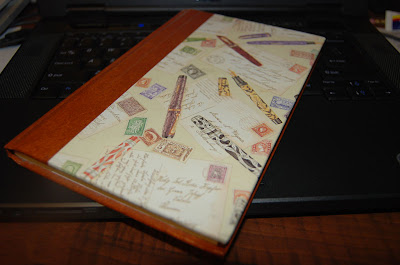