It's been really hot and muggy here in New England during the big heat wave and I've been having a hard time keeping the garden watered.  The soil in most of the beds is poor and rather hard (think mud instead of damp fluffy growing material) and I just didn't have the time or the right tools to amend it before the growing season.  On top of that, I work a 9 to 5 job, so the watering happens after work--after a full day of hot sun.

Yesterday, I went out to do some watering and I discovered nasty rotted brown spots on most of my San Marzano tomatoes.  I recognized it immediately as Blossom-End Rot (BRT) and was very upset at the thought that I might not have canning tomatoes this year. 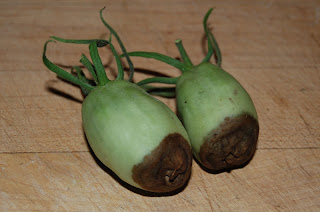 After doing some research, I'm breathing a small sigh of relief and crossing my fingers.  The good news is that it's not a "catchable" disease.  It's basically due to malnutrition.  In order to grow healthy fruit, tomatoes need lots of water (obviously) and good soluble calcium that can travel with the water into the plant to make firm cell walls.  My problem is either a calcium deficiency or not enough watering...probably both.  In any event, it often happens to early fruit and later fruit is fine--something I can live with.

Anyway, I immediately went to the garden shed and mixed-up a bucket of peat moss, some bone-meal based fertilizer, and some homemade compost.  I dumped this absorbent material around the plants and gently worked it into the top layer, hoping to create a "sponge" effect for the water.  I then covered the soil at the base of the plants with some home-chipped mulch that I had on-hand to further protect the wet ground from the hot sun.

Now, I'm sitting-back and crossing my fingers.
Posted by Justin at 7:15 PM