A Bargain at the Farm Stand...Or Was It?

Last Sunday, I went to my favorite farm on my annual pilgrimage to pick blueberries.  When I went up to the farm stand to pay and pick-up a few items for dinner that night, I spotted something I just couldn't resist... 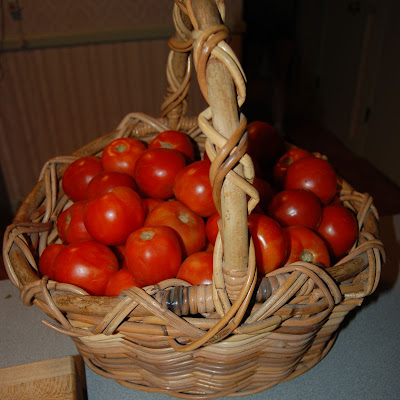 ...an overflowing basket of "Grade B" tomatoes marked "Canning Tomatoes," with a price tag of only $12  It had to be a good 7+ pounds worth of tomatoes.

Now I have to say that I'm no stranger to this stunt.  I was suckered-in by the very same trick last year.  Grade B tomatoes are really just the farm's ordinary variety of slicing tomatoes (often "Beefsteaks") except that they might have a very small blemish on them that prevents them from charging two bucks a pound.  Instead, they stuff them into baskets (not the one in the photo...they don't let you keep theirs), and mark them "Grade B" or "Canning Tomatoes," and charge twelve bucks for the whole lot--quite the steal.

The problem, as I found out last year, is that slicing tomatoes don't make very good canning tomatoes.  Slicing tomatoes are bred for their heft and juiciness.  When you're canning, the last thing you want is juice.  You want a tomato with a lot of firm pulp that won't break-down from the heat of the processing.  I didn't know that last year and ended-up with jars that started full of tomatoes and ended-up half tomatoes and half-water by the end of the ordeal.

Nevertheless, I snatched-up a basket this year, determined to outsmart the mighty tomato with my knowledge of food science and clever wit.  Alas, the tomatoes showed ME a thing or two...

My plan to outsmart the tomatoes centered around a technique I recently learned by watching old DVD's of Julia Child during her black and white television days.  When Julia uses a tomato in a recipe (a "to-mah-toe" as she calls it), she "seeds it."   The process involves slicing the tomato in half along its equator (not through the stem as you'd be tempted to do) and squeezing each half over a bowl as you would a lemon.  During the process, the liquid-filled cavities that hold much of the tomato's water and seeds release their contents into the bowl. You can help it along with your fingers.  The result is a lump of seedless tomato pulp that can be chopped and added to a recipe. 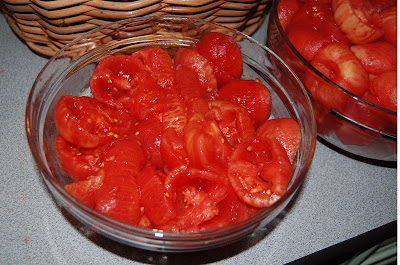 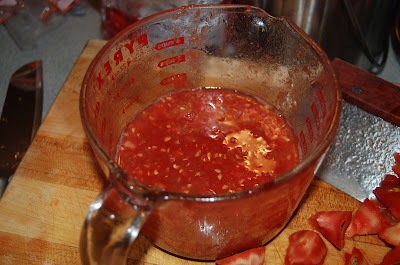 My theory was that if I peeled and seeded each of the tomatoes, I'd be left with mostly flesh and that it'd hold-up better to the canning process. 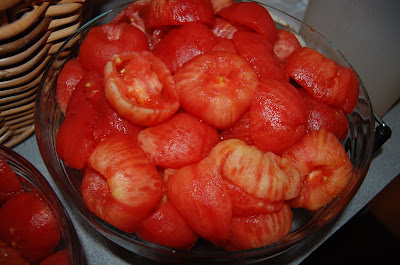 I then figured I could save the liquid, strain-off the seeds, and can that separately as a vegetable stock to be added to soups. 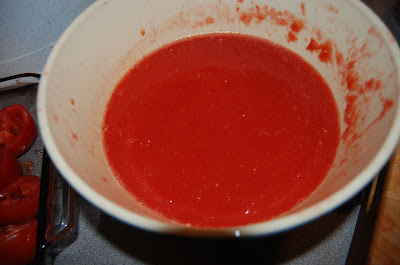 Mu-ha-ha-ha.  What fun!  What joy! to outsmart the slicing tomato at its own game.

In the end, after over three hours of coring, peeling, slicing, squeezing, chopping, packing, and processing tomatoes (and a sore back and feet to boot), the tomatoes won the battle!  I still ended-up with six jars of tomatoes, each with an inch or two of juice on the bottom (did you know that tomatoes float?) and two jars of "tomato juice" that had completely separated into half a jar of tomato solids and half a jar of tasteless watery liquid. 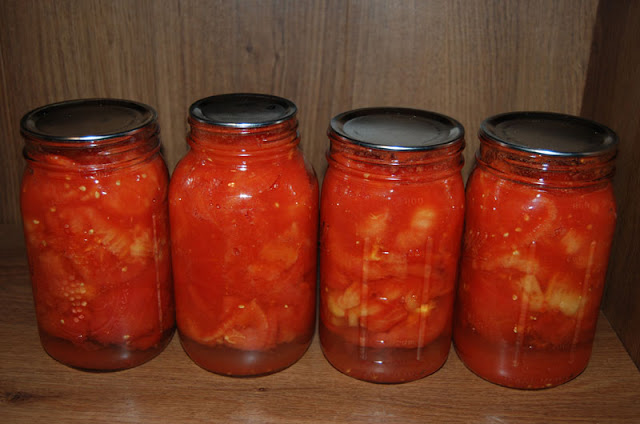 On the bright side, my idea half-worked.  Last year's jars left me with limp, mushy tomatoes in the top third of the jars and the rest was water.  I consider this quite an improvement--but probably still not worth the work.  Perhaps I should stick with the plums or san marzano's next time.

The moral of the story?  Don't try to beat Mother Nature at her own game.  She'll win every time.  :-)