Last week, I decided to stop at one of the local farms on the way home to pick-up some fresh corn for dinner.  This particular farm is a bit of a larger operation and so they're actually open past 5pm.  Most of the others close right at 5--although I don't know why...four of them are right on major commuting routes.  But then, I digress.

So I'm putting the corn into my bag and I look down on the floor at my feet and there are two half-bushel baskets of gorgeous locally grown red peppers marked "$12 Each." 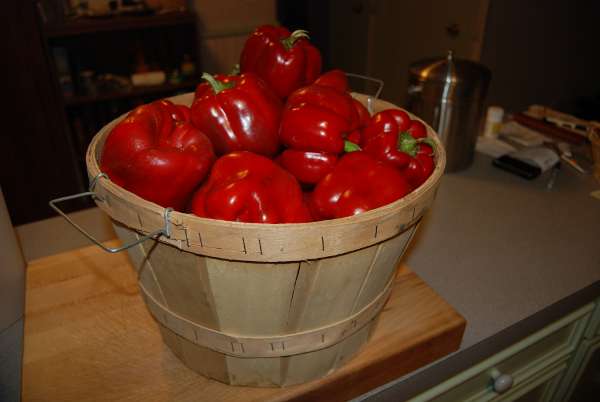 Of course, we all know I'm a sucker for "Grade B" and surplus veggie bargains, as exemplified by the peck of tomatoes incident a few weeks ago.  I also know from experience that when you buy veggies volumetrically, you sometimes aren't getting quite the deal you think you're getting.  I learned this first-hand last year when my favorite farm assured me that the per-pound price for their raspberries worked out nearly the same as their per-quart price (it was not).

So, I grabbed two peppers out of the bucket, weighed them, eyeball-counted the peppers in the basket, did some rough math in my head and came to the conclusion that it came out to much less than a dollar a pound.  A fantastic deal!  So I scooped-up that basket and headed over to the cashier.  Twelve bucks later, I was in my car with the gorgeous basket of peppers on the seat beside me, heading home. 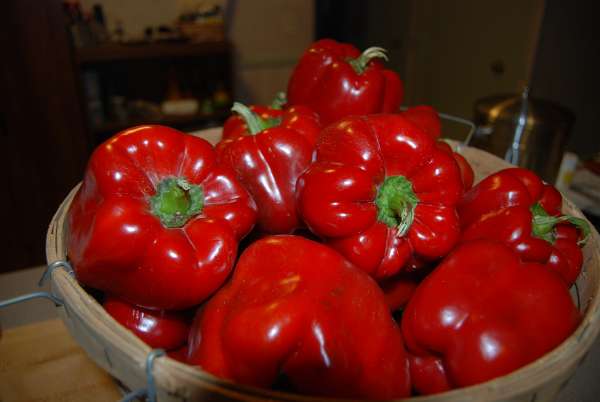 What did I do with all those peppers, you say???  On Saturday, I roasted them under the broiler, peeled, and packed them into a big bowl until I had time to complete the job.  On Monday night, I canned them using a recipe that was posted by Susy over at Chiot's Run (Thanks, Susy!).  I haven't cracked a jar open yet, but don't they look gorgeous? 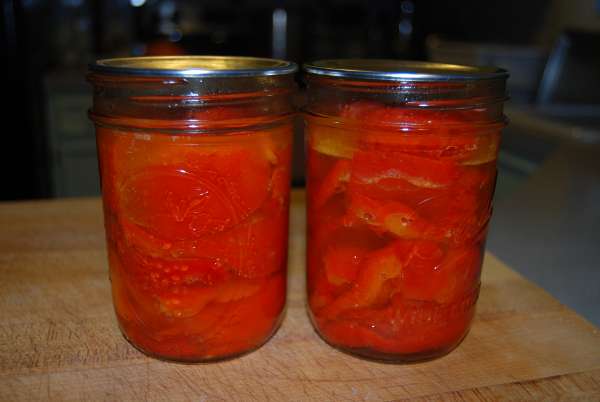