A few months back, I I happened upon a recipe for "Steel Cut Oat Pilaf" and thought, "What an awesome way to use oats for dinner!"  I put the recipe aside and kind of forgot about it.  Last night, I dug it up and decided to give it a try. 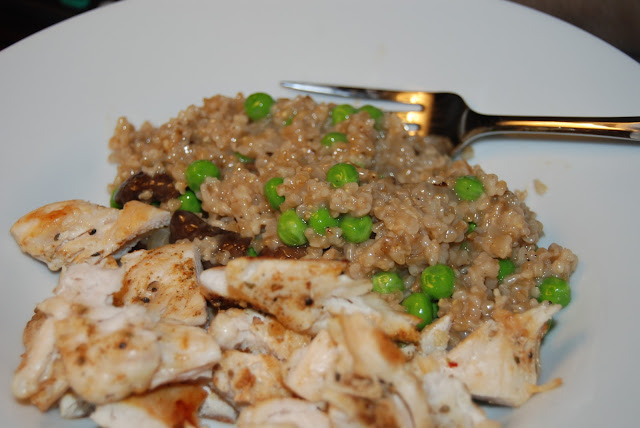 I don't know that I'd exactly call it pilaf.  The thick starch that exudes from the oats has more of a risotto like effect than the separate grains I'd associate with pilafs.  Nonetheless, it's absolutely delicious!  You get the creamy consistency of a good risotto accompanied by the nutty and ever so slightly sweet taste of the oats.  It's not only good for you but it's easy to make, too.  Just get it going and walk away for 15-20 minutes.  I couldn't ask for a better side dish to add to my repertoire.

I'm sharing the recipe below.  It's loosely based on the original recipe from Bob's Red Mill.  Of course, I've made some small changes to suit my own preferences.  Enjoy!


Note: In the world of non-rolled oats, there seems to be a disconnect in the naming conventions used from miller to miller.  You're looking for a coarse granular oat here like a very coarse sand, almost always called "steel-cut" because they're cut with steel burr grinders.  Sometimes, they're called "Irish Oats" but don't confuse them with McCanns brand Irish oatmeal that can also be found rolled.  I've also seen them referred to as "Groats" or "Scottish Oats," but Bob's sells a Scottish style oats that are milled much finer and have small flakes mixed in, so I'm not entirely sure what's up with that.  Whole Foods most definitely sells steel-cut oats in the bulk foods aisle.


1) In a large skillet with a lid or a very wide dutch oven, melt the butter and add onions and mushrooms.  Saute gently until the onions are soft and mushrooms have given up their liquid and darkened.

2) Add the oats and stir, toasting them in the remaining fat for about 1 minute.


3) Add the stock and a pinch of salt and pepper.  Bring mixture to a boil, cover, and reduce the heat to low.  Simmer on low for 15-20 minutes until most of the liquid is absorbed--it'll look kind of creamy/pasty and the oats will be cooked through with a slight chew to them.


4) Remove from the heat and add the peas.  Cover and let stand 5-10 minutes to heat the peas through.  Serve hot and creamy.  If the mixture gets gloppy or you need to reheat it, add a little boiling water to smooth things out.
Posted by Justin at 12:33 PM