For quite awhile, I've been extolling the virtues of risotto as a weeknight meal.  Even made the traditional way, I find it to be incredibly flexible, inexpensive, and relatively quick to make.

Recently, I was watching the PBS television show Lidia's Italy and she introduced an even easier version where you basically throw it in a pot and walk-away for 30 minutes.  What's more, it was a recipe for butternut squash risotto, something that's typically hard to do without having a washed-out flavor.  In fact, Cooks Illustrated did a recipe for butternut risotto recently and the result ended-up so complicated, I won't even make it.

Needless to say, I was intrigued and it just so happened that I had a small butternut in the fridge and it was dinner time.  Into the kitchen I went. 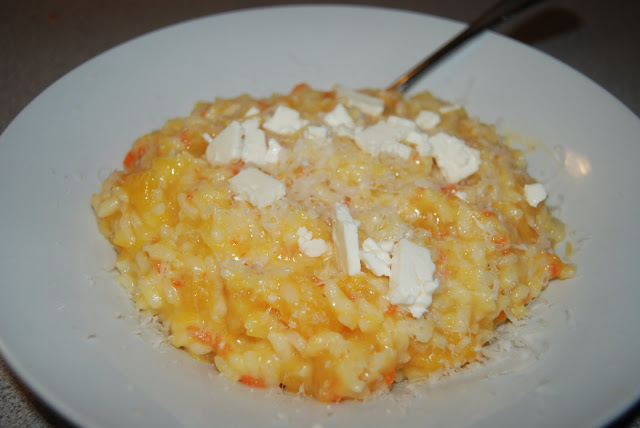 The result was pretty delicious.  As you can see from the photo above, I added some chunks of fresh feta cheese on top because I felt it could use a tad more saltiness for contrast, but it's totally not necessary.  A handful of frozen peas or something green would also make a nice addition towards the end for color and a boost of vitamins.  We served this with some slices of toasted crunchy cheesy bread for a crunchy textural contrast.

If you're looking for a nice easy weeknight meal, I highly recommend this recipe.
Posted by Justin at 11:00 PM