And the Mystery Flower is....

Last year when we purchased the house, I did my best to try to determine what was a flowering plant and what was a weed and an transplanted as much as I could to places where it could grow without being disturbed by my vegetable gardening efforts.  One such plant was a wimpy green one with slightly fuzzy leaves and no flowers.  The leaves looked an awful lot like the leaves of a lemon geranium that I once had but didn't have any smell.  So, I assumed it was some sort of flowering geranium and stuck it in front of the picket fence garden.

The geranium limped along through the summer, growing some nice foliage but no flowers.  When it came back again this year and grew twice as large, I left it alone saying to my wife, "I'm going to give it this season.  If it doesn't flower, it's outta here."  Shortly after, it started blooming... 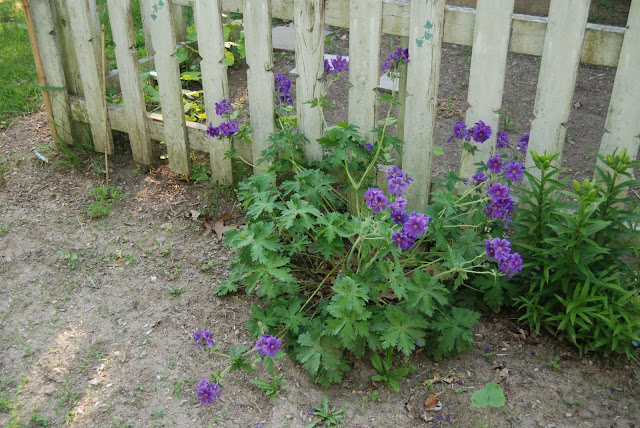 As we've grown accustomed to, they're purple (the previous owner seems to have loved purple in a very big way). 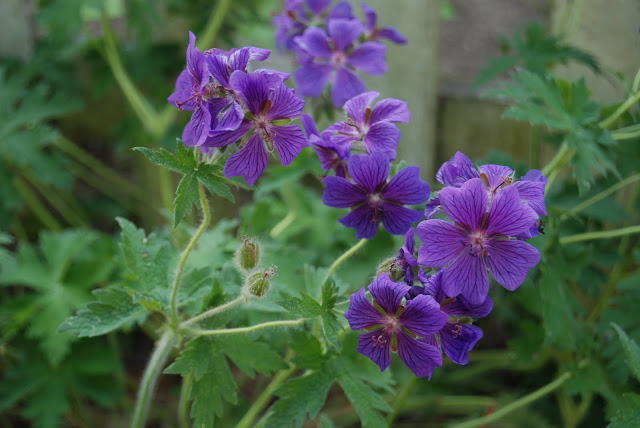 I don't usually like geraniums but these are quite unique.  I think they're quite pretty.  A co-worker of mine's girlfriend is a plant scientist and she reports back that they're of a variety known as "Roxanne".

I will say that they don't hold-up very well as cut flowers.  Within a day of placing a jar of them on the dining room table, the petals had all fallen like confetti.  Guess these are best enjoyed outdoors.

It's wonderful to see that the house still has plenty of beautiful surprises for us.
Posted by Justin at 5:00 AM