If you're a fan of dill pickles and you've never had "Dilly Beans," you're definitely missing out on something awesome.  Picture a standard homemade garlicky dill pickle with the crunch and flavor of a freshly grown green bean.  Yum!

This year, I planted Tongue of Fire beans, as well as some regular green beans.  I had originally planned to harvest them as dried beans but they were out so early that I got excited and picked them (green with some purple stripes on the bigger ones).  They're pretty tasty steamed, but I've had a hankering for dilly beans, so as soon as I had two jars full, I whipped-up a batch and stuck them in the fridge (no need to can them since I was planning to dig-in right away). 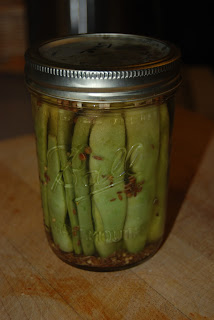 I used this recipe from Marisa over at Food In Jars.  I chose it because it was a small-batch recipe and the one from the Ball book calls for massive amounts of produce.  My one recommendation is to cut back to one clove of garlic per jar.  Two was a little too garlicky, even for my tastes.  If you want a stronger dill flavor and have it hanging around, a stalk of fresh dill can be used in place of the dill seed.  Instead of processing the pickles, simply place in the fridge to cure overnight--a day or two is even better.

Refrigerator pickles are a great way to have instant gratification from your garden or the farmer's market (seriously...these took all of 15 minutes to make and most of that was chopping).  Besides, what goes better with a toasted sandwich than a couple of homemade pickles and some salty potato chips?
Posted by Justin at 9:16 AM