The One Where We Subsisted Almost Entirely on Zucchini Bread...

Just prior to the hurricane where we lost power for the better part of a week, I had purchased some overgrown (large) zucchini from a local farm.  I love the extra-large ones because they're usually incredibly cheap and it means one thing...zucchini bread! I made a double batch, planning to slice and freeze it so that we'd have delicious, moist bread to snag for breakfast over the next two weeks.  Needless to say, without power and refrigeration for the better part of a week, we ended-up eating it all during and after the storm.  It was delicious and worth every calorie. 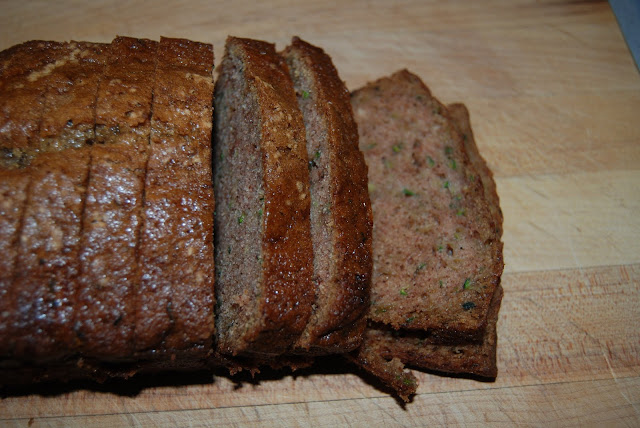 I've had a hard time finding a zucchini bread recipe that I like.  To me, it should be moist and dense like banana bread and not too heavily spiced.  I like the bright green zucchini to show when you slice into the loaf and I like the same batter to hold-up to making muffins.  Recently, I tinkered with and modified an America's Test Kitchen recipe and I think I've come up with something I can call my own.  I thought I'd share it with you today.

Note: If you don' t have buttermilk or yogurt, don't leave it out!  Use 1/4 cup of regular milk mixed with a splash of vinegar (the actual substitution is 1 tablespoon vinegar to every cup of milk).  This is called "sour milk" and is often used to substitute for buttermilk in recipes.  You never want to outright remove buttermilk from a recipe because the acid is usually balanced with additional baking soda.  Taking it out will make a PH-unbalanced recipe that may not rise correctly and will probably over-brown.

2) Wash the zucchini and cut the ends off.  Using the large side of a box grater, grate the zucchini.  Squeeze with your hands over a strainer to remove as much water as you can.

3) Mix the dry ingredients in one bowl and set aside.  Mix the wet ingredients except for the zucchini in another bowl.

Tastes great sliced, warmed, and slathered in cream cheese.
Posted by Justin at 5:00 AM