What to do with a Glut of Green Tomatoes 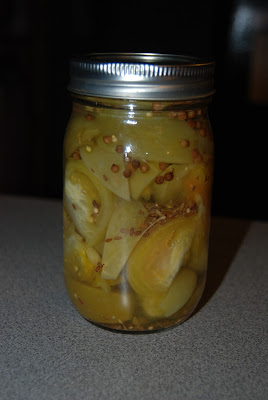 Last week, my father called me...

"I've got something for you," he said.

"A HUGE box of green tomatoes from a friend at work," he replied.

"Oh, so you mean you've got something for YOU," I said with a chuckle.  "You want Piccalilli."

While I tend to let my tomatoes continue ripening on the vine until the first frost (especially this year, as they've been slower than normal to ripen), many people give up once the cool weather comes and yank the vines out of the ground, leaving piles upon piles of unripe green tomatoes and they have no idea what to do with them (other than the veritable "fried green tomatoes").  We made two things with those tomatoes: Dill Pickles and Piccalilli.

I didn't realize it until I tasted the finished batch, but green tomato dill pickles are quite good.  In fact, if I closed my eyes, I'd swear I was eating a cucumber dill that was slightly softer in texture (though not unappealingly so).  We followed Marisa's recipe over at Food In Jars, substituting quartered tomatoes for the cukes.  The great part about this recipe is that you don't have to get into canning to turn-out great pickles.  They pickle just fine stashed in the fridge.

The other thing we made is an old family recipe called Piccalilli.  As best as I can tell, this is one of those canning recipes that varies widely depending on the region, ethnic background, or family recipe.  Generally speaking, it's a relish or a chutney, most often made out of green tomatoes.  However, the add-ins and exact spices are what make each recipe unique.  See what Wikipedia has to say on the subject (altho that mustard piccalilli in the photo is a bit scary).

Our recipe for Piccalilli comes from my paternal grandmother and I'm not quite sure where she got the original.  It came to me, as most old recipes do, with imprecise measurements (a quart of this, a half-bushel of that, 3 small onions, a pint of something, and 2-3 cups of sugar to taste).  After making it twice, I think I've actually worked out more exact measurements so we can get a consistent product from year to year.

Chances are, if you like the taste of hot dog relish or bread and butter pickles, you'll probably like Piccalilli.  I'm on the fence, personally...I really make it more for my father and grandmothers (and his friend at work who gave him the tomatoes).  You could use it in a variety of ways.  One of my grandmothers loves it as a small side dish like you might serve applesauce or beets.  It'd probably taste just fine in a sandwich or in place of relish on a hot dog.  I think it'd be pretty tasty warmed and served as a sauce over chicken or fish like you might do with a chutney.

In any event, I'd love to share the recipe for it here with you today.  If you don't want to can it, a small batch will keep pretty well in the fridge.  Just cook it a little longer and make sure to scald your jars and lids in boiling water so it'll keep as long as possible.


Notes: All volume measurements are taken after chopping.  The recipe can be halved or otherwise scaled as necessary.  We make it with coarsely chopped chunks of tomato.  If you want a less-chunky end-product that's more like relish, use a food processor to chop the ingredients but don't puree them.

1) Prepare all vegetables and mix together in an extra-large bowl.

2) Toss vegetables with salt.  Cover and let stand at least 2 hours or overnight.

3) Pour-off/strain the water that exuded from the vegetables during the salting process.

5) Place mixture in a large non-reactive pot and cook over medium heat until the tomatoes are soft.

6) Fill jars, remove air, wipe the rims and lid them up.  Process in a boiling water bath canner for 10 minutes.  If you've never canned before, be sure to consult a good canning book such as the Ball Blue Book to learn the basic process and safety practices.

7) Alternatively, Piccalilli will store well in sterilized glass jars in the refrigerator for a few months.  Sterilizing the jars (either by boiling or using the sterilize function on your dishwasher) helps keep initial bacteria out of the jar so they will last longer.  Note that even if they seal, they are not shelf-stable unless canned in a boiling water bath. 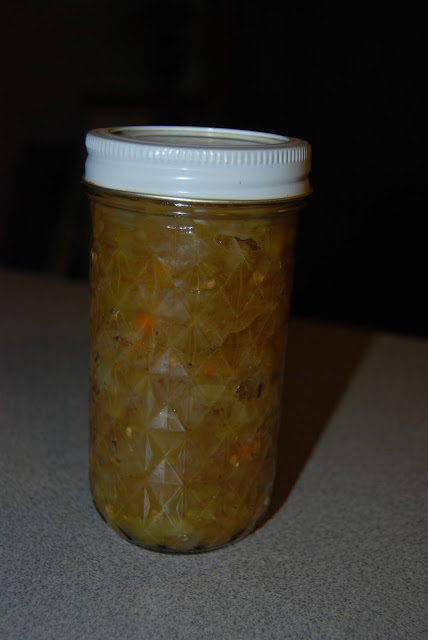