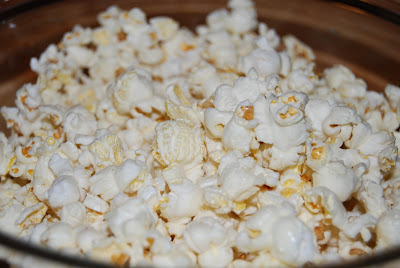 I have to admit, I've never been a big fan of microwave popcorn.  It's not that I'm against microwave cooking or convenience foods.  It's more that I've never felt that the benefits outweighed the drawbacks.  For example:
Some hardcore health-nuts say an air popper is the tool for the job if you're not going to nuke your popcorn.  Personally, I think it turns out a bland product and it's a uni-tasking appliance, which I just don't have room for in my kitchen.  So out comes the big old fashioned pot and in goes the popcorn--right on the stove.

So how is it done?  I thought you'd never ask!

A Word on Choosing a Pot...
Probably the most important part of this recipe is choosing the right pot.  You need something with a single saucepan-style handle and a lid with a stay-cool handle on the top, somewhere in the 4 to 5 quart range.  It should be made of metal and be light-weight enough to pick-up and shake.  A heavy bottom is preferable, but your cast-iron cookware or fancy Le Creuset pot would NOT be a good choice here.

1) Pour enough vegetable oil into the pot to coat just the bottom.  If there's more than 1/8-inch of oil, you've put too much.

2) Place exactly THREE popcorn kernels into the oil, cover the pot, and shake it to coat the kernels.  Make sure the remaining kernels are nearby, as well as your largest serving/mixing bowl.

3) Place the covered pot onto the stove and crank the temperature to medium-high.  Periodically shake the pot to toss the kernels until all three of them pop.  This is how you'll know the oil is at the correct temperature.

5) As soon as the new kernels start to pop, shake the pan vigorously every few seconds to make sure the unpopped kernels move to the bottom and the fluffy white ones move up and out of the oil.  This prevents burning.  Continue to shake-and-cook, shake-and-cook, until the popping begins to slow-down.

6) Remove the pan from the hot burner as soon as the popping has slowed significantly but do not wait until it has completely stopped popping.  It's better to end-up with un-popped kernels than to burn your entire batch.

7) Once the popping has subsided, remove the cover and pour the popcorn into the waiting bowl.

8) Using the residual heat from the pan (or the microwave if you're more comfortable), melt 2 to 3 tablespoons of real butter.  After all, if you're going to do the work, you might as well do it up right.  Drizzle the butter over the top of the popcorn and toss with your hands to coat all the popped kernels.  Add salt to taste, tossing again to coat.

9) Consume the entire bowl yourself or share with family if you must.  If you feel the need to pop ahead, it can be stored once cool in zip-top bags and will keep a day or two. 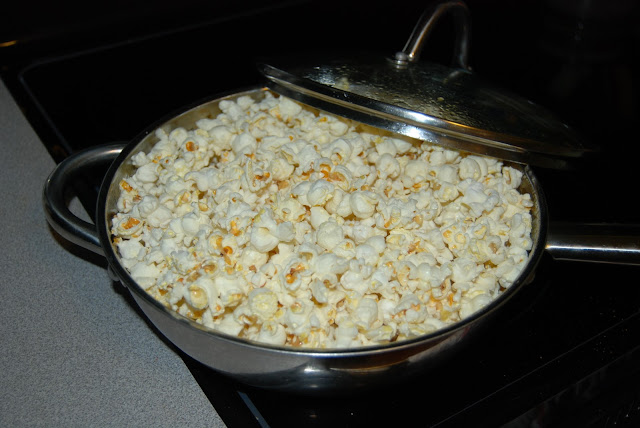