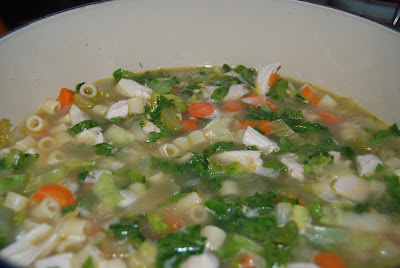 Growing-up in Rhode Island, it was impossible to avoid Italian-American influences on everyday life, especially those that centered around food.  The fact is that Italian families ran most of the "Family Restaurants" in the area and still run the better ones.  As a result, many of the food customs we take for granted around here stem from Italian culture.

One of those cultural mainstays is the knowledge that if you order chicken soup with your meal, it's most likely going to have floating bits of a hearty green in it called escarole.

I don't know much about the history of Chicken Escarole soup, but I suspect that it's a direct descendant of "Italian Wedding Soup," which is more or less the same thing but usually contains tiny meatballs in lieu of the chicken.  There's also Venus de Milo soup, a variation containing ground beef that is still served at the Venus de Milo restaurant in nearby Massachusetts (Emeril once worked there).  In any event, I'm sure Chicken Escarole was probably born of thrift, with many restaurants wanting to make use of the previous day's leftover roast chicken instead of hand-rolling little meatballs.

I recently decided to try my hand at making Chicken Escarole soup and it came out absolutely delicious.  Escarole, if you're not familiar with it, is a hearty lettuce that can stand-up to a little cooking.  Its flavor is mild, tasting slightly like spinach, though not nearly as bitter.  I think it'd actually taste quite good as part of a garden salad.

1) Dice the onion, celery, and carrot into spoon-sized pieces.

2) Remove the core from the head of escarole and chop the greens into bite-sized shreds.  Wash well and allow to drain.

3) Saute the onions, celery, and carrots in the olive oil and a pinch of salt until the onions begin to soften.

4) Add the stock, water, chicken, and pasta.  Bring to a boil and reduce to a simmer.  Taste and adjust the seasoning with salt and pepper at this time.

5) Simmer until the pasta is just undercooked.  If the box has a recommended cooking time, cook for one minute less than specified for "al-dente."  Add the escarole and stir it in.  It may not look like it will all fit, but it will.

6) Continue to simmer until the escarole wilts and is heated through--about 2-3 minutes.

7) If the soup is too thick, add additional water and re-adjust the seasoning.

Serve hot with a bit of crusty bread or cheesy toast.  Soup keeps well refrigerated for 3-4 days.  Freezing works, but may alter the texture of the pasta.  If the soup thickens because the pasta absorbs more water during storage, add more water prior to reheating.
Posted by Justin at 6:16 PM