Getting My Kraut On

I have a confession to make.  Up until a few weeks ago, I had never tried sauerkraut.  I absolutely love sour pickles and dill pickles and I love cabbage, but I always assumed--I have no idea why--that sauerkraut was a sweet pickle (which I don't like), so I just never tried it. 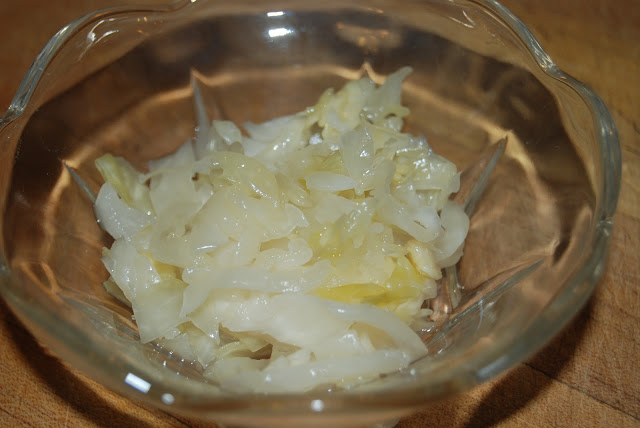 It also turns out to be incredibly easy to make.  I'd been shying away from fermented pickles because I had visions of spending half an hour each and every day, skimming scum off the top of the crock, then finding that the entire batch had gone bad and stunk-up the house because some tiny little thing was off or the wrong bacteria snuck into the batch.  As it turns out, it was easy as pie and I don't know why I waited so long.

I decided to more or less follow Susy's recipe from Chiot's Run.  Using my knife (you can use a food processor), I finely sliced/shredded a head or two of cabbage, began salting and smashing it, and stashed it in my tallest ceramic bowl (I didn't have a pickle crock or a gallon mason jar).  Topping it off with a little brine, I weighed it down with a dessert plate and a mason jar and let it sit on the dining room table for about 4 weeks.

I have to admit that by day two or three, it smells a little funky and there is a little bubbling going on.  By day 4 or so, it had settled down and there was much less of an odor.  Though without bubbles, I thought I had lost it.  However, I just let it keep going.  Turns out, it didn't need to be visible bubbling to keep working its magic.  Periodically, I'd taste it, noticing it begin to get sour.  At about week 4, I deemed it sour enough for my liking and packed it into some clean mason jars and stashed it into the fridge.  The yield was about two quarts, which should keep me happy for awhile.

Looking forward to getting some nice organically grown cabbages from the farm stands this year and maybe actually canning a batch for longer-term storage.
Posted by Justin at 5:00 AM