In Which I Conquer The Chicken Nugget 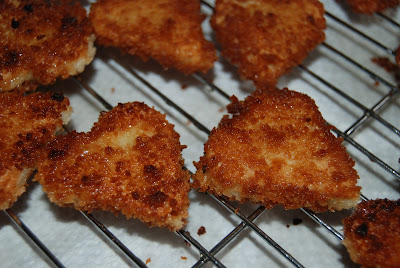 If you've been following this blog for awhile or know me personally, you've probably heard one or more of the following phrases come out of my mouth:

"I don't believe such a thing exists as 'kid-friendly food'.  If you start early and develop your child's palate, they'll learn to eat a variety of things and enjoy them."

"My kid will never only eat french fries and chicken nuggets."

Folks, that was before I actually had a child.  Now that I have one, things look a little different from the other side of the fence.  Sure, true to my word, we've offered her a wider variety of foods than most children her age have ever tasted.  As a result, she'll eat just about anything you shovel into her mouth with a spoon.  I've only ever seen her spit something out once.  However, since she started eating "finger foods" (aka feeding herself), she appears to have acquired some sort of texture issue.

You see, she won't pick-up anything soft, wet, or squishy and put it into her mouth herself.  I have no idea why.  Feed it to her off your fork and she'll eat it--most of the foods are things she's been eating spoon-fed for months.  This is purely a finger-touch thing and I suspect she'll grow out of it shortly.  In the mean time, we're kind of stuck with a kid who vehemently wants to feed herself but won't try it with anything that isn't crunchy.  Thus begins the tug-of-war of trying to get her to eat a balanced diet (as opposed of one that consists entirely of crackers, toast, waffles, Cheerios, etc.).  And mind you, I also don't subscribe to the school of thought that you should hide fruits and veggies in other foods, so that option is out.

So what to do?  Well, we asked the daycare center what the other kids were eating.  The teacher, obviously used to the question, reached into a drawer and produced a printed list.  Right there amongst all the things we had already tried, the things she was already eating, and the things that were not yet age appropriate, was an item that stood-out, clear as crystal...black and white:

You see, I don't actually have a fundamental problem with chicken tenders or even processed chicken nuggets.  I even eat them myself from time to time and enjoy them.  Heck, I subsisted on processed chicken patty sandwiches almost entirely throughout college--out of my love for them, not out of my distaste for the other options available.  Sure, they're a "sometimes food," but beyond that, I don't have a beef with them (or a chicken, as it were).  So why all the fuss?

Bottom line, I don't want to teach my child so very early in life that meat must come ground-up, processed, seasoned to death, compressed into odd shapes, breaded, and deep-fried in order to taste delicious.  That's really it.  I want her to know chicken as chicken...not as little crispy fried dinosoar shapes that came in a big red plastic bag.

On the other hand, they are "crispy" and that might just get her to put them into her mouth.  However, she only has 3 teeth and breaded all white meat chunks of chicken just won't be tender enough for her to gum-chew.  So, it's either I buy the softer processed chicken nuggets or find another way.  Hmmm...could I make them?  You bet I can.  :-)

Before we get to the recipe, here are a few notes/thoughts:
Homemade Chicken Nuggets

1) Cut the chicken into 1-inch cubes and place into the bowl of a food processor fitted with a steel blade.  Add the flour, water, salt, garlic powder, onion powder, and pepper.

2) Process in short pulses until the chicken resembles a paste.  The more you process the meat, the firmer the resulting nugget will be.  If you prefer a looser nugget, try only "chopping" the meat into fine chunks. 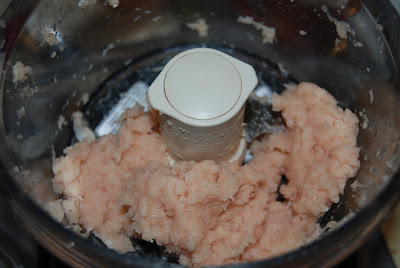 3) Turn the chicken "dough" out onto a generously floured board.  Pat the dough into a circle and then flatten to approximately 1/2-inch thickness or however thick you would like your nuggets to be. 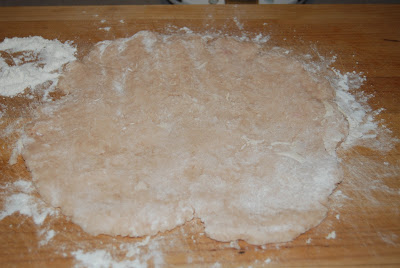 4) Using a cookie cutter or a small glass dipped in flour, cut nuggets into shapes and lift onto on a drying rack set over a tray using a small offset spatula.  Gently pat out any scraps and continue to cut nuggets until almost all the dough is gone. 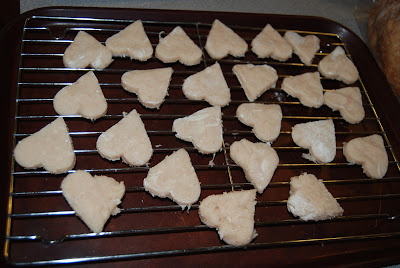 5)  Heat 1/2 inch of oil in the bottom of a saute pan to about 350 degrees.  You can tell if the oil is ready by placing a cube of bread into the oil.  When it's toasted and brown, the oil is ready.

6) Beat one egg and a tablespoon of water in a shallow dish until well mixed.  Spread a layer of bread crumbs into a second shallow dish.  If using panko, crush them into a finer consistency using the flat bottom of a water glass.

7) Bread each nugget by dipping first into the egg, then into the bread crumbs.  Place each nugget back onto the wire rack to allow the breading to adhere and prevent the underside from getting gummy. 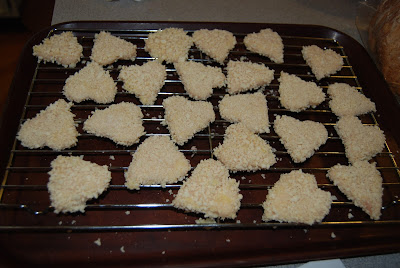 8) Shallow-fry a few nuggets at a time, turning with a spatula or tongs once the first side is golden-brown and removing once the second side is also golden-brown.  They cook very quickly and burn easily, so be careful! 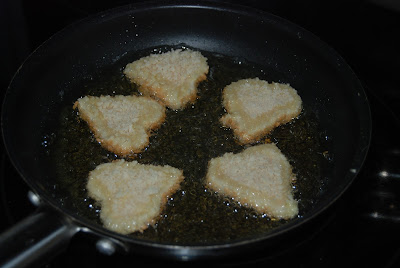 9) Remove each nugget to a second rack set over a tray with a layer of paper towels between the rack and the tray.  Serve immediately (with ketchup, of course!) or allow to cool and freeze in a zip-top bag. Nuggets can be defrosted and re-heated in a 350 degree oven on a sheet tray. 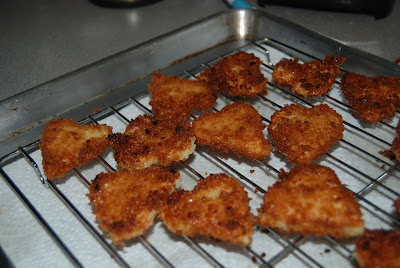