A couple weekends ago, as any good New England family would do in Autumn, we took the little one apple picking.  See? 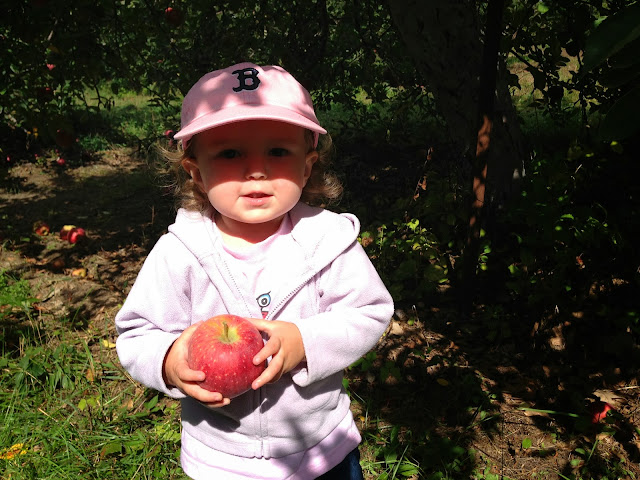 I didn't weigh or accurately measure the volume of the haul this year, but I'm pretty sure we had well over half a bushel if not closer to a whole bushel.  Of course, as is more or less tradition in my family, the first thing made was a HUGE tray of Apple Crumble. 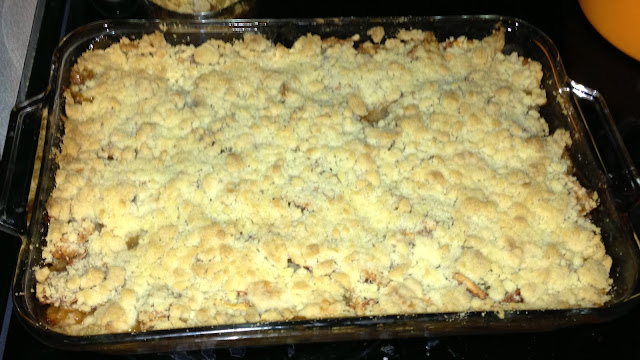 "Apple CRUMBLE," you say?  "Isn't it supposed to be Apple CRISP?"

Well, we always called it crumble and here's where I draw the distinction, personally.  Apple Crisp traditionally has oats in it.  This does not.  It's pretty much a straight sugar-butter-flour topping like you might find on the top of a crumb cake.  Thus, Apple Crumble.

So without further ado...cause I know you're all drooling and hungry...here's the recipe:

Notes: This recipe is based on one my Mom had on an index card that she's been using for years.  The original had no cinnamon in it, but I prefer it.  The recipe can be doubled easily and truthfully, I usually do.  Also, the crumble makes a great topping for an apple pie instead of a top crust.  If you buy a frozen bottom pie crust, you can crank-out an apple crumb-top pie with little effort.

2) In a small bowl, mix the two ingredients to make the cinnamon sugar.  Sprinkle over apples and toss to coat.  Spread apples evenly in the baking dish.

3) In a large mixing bowl, combine flour and sugar with a whisk.  Cut butter into small cubes and add to the flour/sugar mixture.  Using clean hands, massage the butter into the flour mixture.  You can squeeze the dough as it begins to form to force the flour into the mixture.  When you're done, it should look like a loose, dry, very crumbly pie or cookie dough.  If you don't want to do this with your hands, you can use a food processor or stand mixer with the paddle blade.

4) Break the dough into crumbles and sprinkle as evenly as possible over the apples.

5) Bake until the top is brown and apples are soft when pierced with a knife (but not so soft that they've become applesauce).  Time will vary greatly depending on the variety of apples you use.
Posted by Justin at 6:00 AM