Recently, my wife and I were perusing our favorite Antique and Primitive store when I happened upon a uniquely shaped cast iron pan hanging on the wall.  It was about 10 inches across but 3 inches deep, far deeper than your average frying pan but much too shallow to be considered a dutch oven or a soup pot.  It had a side handle like a frying pan and was in excellent, ready-to-cook condition.

I picked it up, turned it over, and was surprised to see that it was a Wagner piece and that it was marked only $25.  Wagner's are not exactly rare, but they are sought-after because they're quite old and not manufactured anymore, usually very smooth (as opposed to the bumpy finish found on most newer cast iron), and a bit on the thinner side, making them a little bit lighter.  This particular one was a unique shape that I hadn't seen before and I wasn't sure what it was called.

As much as I wanted to buy it, I really have no room to store additional pans, so I put it down and walked away.  About a month later, we were back at the same store and it was still there.  That time, I couldn't resist any longer and I snatched it up.  I brought it home, gave it a good scrubbing, oiled it up, and sauteed some veggies in it. 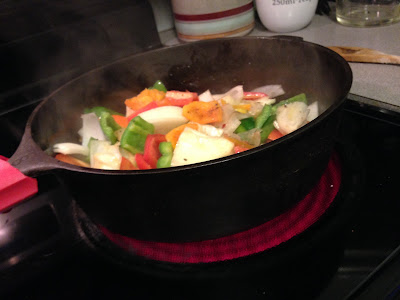 Come to find out, it's not a particularly unique piece.  It's called a "Chicken Fryer" and I imagine they're more plentiful in the south where they fry-up a lot more chicken than we New Englanders do.  It is rather old, possibly cast in the 1940's.  The markings on the bottom are from post-1920.

Old cast iron pieces are a really good find and a great addition to your cooking arsenal.  They're often well-seasoned (even if they usually need a good scrubbing and a light re-seasoning), as smooth as some non-stick cookware, and cheap (often, cheaper than new pieces).  You can also find unique shapes and sizes that aren't manufactured today.

But most of all, cast iron isn't nearly as fussy as people make it out to be.  In fact, cast iron is almost easier to take care of than Teflon.  Once it's well-seasoned, there's really very little you can do to destroy it (short of dropping it on concrete and splitting it).  Here's a great post about the myths and maintenance of cast iron pans.  Ignore all the stuff about salt rubs, no-dish-soap, and so on.

Here are a few tips I've learned over the years by actually working with my cast iron: