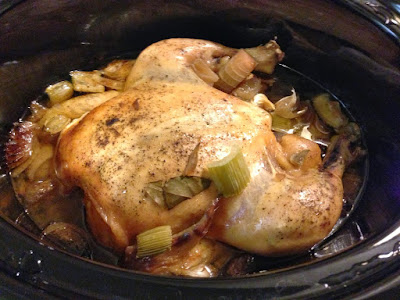 looking for recipes or dissatisfied with the outcome of the first recipes they've tried.  Since I've been around the block a few times with my own slow cooker, I thought I'd do a post with some do's and don't's based on hard food science and personal experience (and a whole lot of trial and error).

Tip #1 - Choose the Right Cooker
You'd think all slow cookers are created the same, but that's not the case.  The original Crockpot brand cooker your mother had was probably a simple heating element underneath a permanently fixed ceramic crock with a dial that had three settings: Low, High, and Off.  Also, it was probably no larger than 5 quarts.

Today's high-end cookers are upwards of 7 quarts and made of all kinds of materials.  Many have fancy computerized controls and timers, probe thermometers, removable pots (for easier cleaning), and non-ceramic ones often have "browning" settings or can convert to a fast-cooking electric stew pot.

My recommendations are middle-of-the-road.  You want a cooker that heats evenly since you're after a "low and slow" cooking method.  This means you should look for a ceramic crock, not a metal insert.  A timer with an automatic "keep warm" setting is nice since you probably want to be away from the house as it cooks and having it slow-down the cooking before you arrive home is usually a must with today's work schedules.  You won't usually find a browning setting on a ceramic model (ceramic will crack if heated fast), so that usually knocks that feature out of the running, but it's a reasonable price to pay for more even cooking.  I'd rather have a pot that does one job well rather than multiple jobs in a mediocre fashion.  Here's how I chose my favorite cooker.

Tip #2 - Choose the Right Recipes
We've all seen those quick 1-minute "dump, stir, cook, voila!" videos that float all over social media.  It looks so quick and easy and the results are usually gorgeous and look delicious.  Ever tried to make those recipes?  They usually end-up as a muddy-colored, dull-flavored mess on a plate.  They're also usually not as easy as they look because they leave out footage of all the chopping and prep work.

In order to understand what recipes work best, you need to understand what a slow cooker is designed for.  Slow cookers were designed to mimic the behavior of bean pots and dutch ovens, which sit over low heat or in a low oven (200 degrees or so) for long periods of time (4 to 8 hours).  Many foods don't stand-up well to that long of a cooking time like lean meats (fish, chicken breast, lean beef, pork tenderloin and loin, etc.).  Contrary to popular belief, they will dry out even if submerged in a flavorful liquid.  If you're going to cook lean meat in a slow cooker, be sure your recipe makes a nice gravy or sauce to re-moisten the meat at the table.

Slow cookers are best at braising and the best cuts of meat for slow braising have fat, marbling, or protective skin coatings.  Things like chuck roasts, pork butt (aka "Boston Butt), pork shoulder, chuck stew meat, whole chickens, chicken or turkey thighs and legs, and so on.  They contain natural fat, collagen, and connective tissue that will break-down and improve in texture and flavor with a long, low, slow cooking.  Hearty soups, stews, and chili are other excellent candidates.

Tip #3 - Maximize Flavor
One thing about long slow cooking is that all of the flavors in the dish will muddle together into a uniform, kind of flat taste.  It'll be savory, but lack dimension and one strong ingredient, like onions or garlic, may take-over the dish.  You can work around this in a variety of ways.

First of all, season your dish well upfront.  Use plenty of salt and pepper.  Add flavorful liquids like chicken stock or wine instead of water.  And make sure you include aromatic vegetables (celery, onion, carrot, garlic) and herbs and spices.  Depending on what you're making, you may want to use sacrificial aromatic veggies that will be removed or puree'd into a sauce and add fresh veggies close to the end of cooking to be eaten whole.

Second of all, adjust seasonings or make a sauce towards the end of cooking.  You may want to pour off the liquid, strain it, and make a simple gravy on the stove.  You may want to puree the softened vegetables into a sauce and add some cream.  Or maybe it needs a tablespoon of vinegar or a squeeze of lemon.  It may also need more salt and pepper or fresh herbs.

Thirdly, consider browning meat in a skillet before cooking.  Contrary to popular belief, browning does not "seal in juices," but it does create flavor, texture, and color.  If your schedule doesn't permit browning in the morning, meat can be browned the night before and all other ingredients measured and prepped and then stored in the fridge overnight.  In the morning, it becomes a dump-and-stir operation.

Lastly, bloom your spices and sweat your vegetables.  Place the aromatics (onions, celery, etc) and any dry spices into a bowl, coat with a little oil, and microwave until the vegetables begin to soften.  This does two things.  First, it cooks some of the sulfuric bite out of the onions and brings out the sweetness.  Without pre-cooking, onions can take over a pot of soup and make it acrid and inedible.  Secondly, it blooms the spices.  Most spices in your cabinet are oil soluble, meaning their flavor carries best in oil, not water.  Cooking them for a short time in oil brings out their best flavor.

Tip #4 - No Peeking!
Slow cookers cook best when a small head of steam builds-up inside the pot, which creates slightly increased pressure (similar to a pressure cooker, but not nearly as powerful).  Every time you open the pot, you're releasing that steam and it has to build-up again, which will add to the cooking time.  Open the pot as infrequently as possible.

Tip #5 - Size Your Recipe or Pot Correctly
Slow cookers are designed to work best when the pot is half to 2/3 full.  This is because the pot needs area for a head of steam to build-up and help with the cooking.  If you overfill the pot, there won't be enough extra room.  If you under-fill the pot, it'll take too long to recover when the lid is opened.  Also less of the food will be in contact with the heated sides of the pot.  You also may lose the cooking water and scorch the bottom of your meal.  If you're going to be cooking for 2 people on a regular basis and want to make smaller recipes, consider buying a smaller cooker or having two sizes.

Tip #6 - Spray the Crock
I have a cooker with a dark-colored crock and every time I'd cook something, I'd end up with "ring around the crock," a white haze that lines-up with water line of the cooked food that was impossible to scrub off, even when soaked in vinegar.  I believe this is a mineral residue, from hard water, chicken bones, etc.  If you spray your crock with cooking spray prior to adding the food, this will never happen.  Even if you're doing a soup that's all liquid, still spray the pot.  Your scrubbing arm will thank you later.

Tip #7 - The Amount of Liquid Matters
Slow cookers actually don't need a lot of water to cook.  An inch or so is plenty for large cuts of meat.  One of my favorite recipes is a chicken cooked in a slow cooker where you add the chicken dry, season it, place a few veggies around it, then start cooking.  The chicken releases just enough juice to do the cooking and makes a really concentrated flavorful gravy for serving with it.

Here are a few of my Favorite Recipes that work in a Slow Cooker: