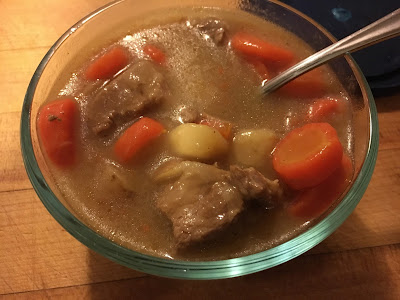 A couple weeks ago, I had a hankering for beef stew.  It had been cold and snowy and beef stew was one of my Mom's specialties when I was growing-up.  Unfortunately, my wife doesn't like beef.  In fact, she doesn't eat much in the way of red meat at all.  One of the few red meats she will eat is pork and only when prepared in certain ways.  She happens to really like the Halloween Stew that I make, so I thought maybe I could just try to make a beef stew and substitute some pork butt (boneless shoulder) meat instead of the beef.  And that's how this recipe was born.

It turns out that pork is an excellent and economical stand-in for beef in a beef stew recipe.  It also turns out that my wife doesn't much like this stew.  Oh well, more for me...

Pressure Cooker Variation
Prepare as directed in the base of your stove-top pressure cooker up through step 5.  In step 6, close the pressure cooker and bring it up to full pressure.  Cook for 25 minutes.  Quick release the steam and return the pot to the stove.  Finish the rest of the recipe steps to thicken the broth.

Slow Cooker Variation
Prepare pork and vegetables as described.  Instead of browning the meat and sauteing the aromatic vegetables, place the vegetables in a microwave safe bowl.  Coat with olive oil and a pinch of salt.  Microwave on high 3-5 minutes until they have started to soften and the onions lose their pungent odor.  Place the vegetables, meat, and broth into the slow cooker, omitting the red wine.  Cook on low for 8 hours or high for 4 hours.  Remove 2 cups of the broth to a saucepan and thicken it into a stiff gravy using the instructions in steps 7 and 8.  Stir the gravy into the slow cooker.  Alternatively, it can be left as liquid and tastes delicious.
Posted by Justin at 8:00 AM