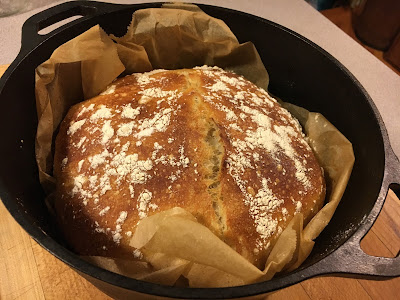 I consider myself a comfortable bread baker.  I can churn-out a decent basic sandwich loaf, a pretty delicious no-knead country round, and pretty awesome english toasting bread.  I've done different types of rolls for thanksgiving, pita bread, naan, english muffins, and pizza.  But there's one thing I've never gotten around to mastering.  Sourdough.

For the uninitiated, sourdough is similar to making any other kind of yeast bread except you grow your own yeasts...from scratch.  You do this by creating a "sourdough starter," essentially a slurry of flour and water that encourages the natural yeasts already present in the flour to start growing and crowd-out and kill any bad bacteria.  Once they get going, these natural yeasts ferment, contributing not only the carbon dioxide that you need to bake bread, but a beer-like yeasty flavor, a little alcohol, and lactic acid, which makes the starter taste sour.  It's the very same process used to brew beer and make yogurt.

The main reason I haven't gotten into sourdough before now is time.  It takes a week or more to get a starter going and it can be temperamental to try to do it during the warmer months.  Also, once you have a starter going, you can let it snooze and slow-down in the fridge, but it still must be "fed" with fresh flour and water at least once a week so the yeast doesn't die.  It's a bit of a commitment...kind of like owning a pet that only needs to be fed once a week.

Last week, I happened to be listening to one of my favorite podcasts, The Splendid Table, and they happened to air a segment about sourdough featuring Bridget Lancaster from America's Test Kitchen.  She described it as so easy and casual and I was in the right frame of mind, so that night, I looked-up her method (see link above), gathered the ingredients, and stirred-together the beginnings of a sourdough starter.

I was pleasantly surprised that after just about a week of feeding, I had a starter that smelled divine and seemed to be doubling itself about every 8-12 hours.  So on a whim, I fed my starter one morning before work and used the throw-away portion to put together a sponge for a no-knead sourdough loaf.  I figured if it didn't puff-up like it should, I'd at least have pizza dough for that night's dinner.  However, it turned out to be a smashing success!  My first sourdough loaf: 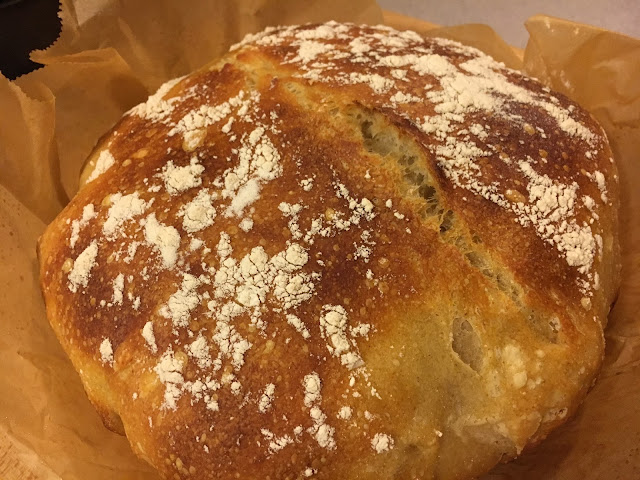 It was pleasantly tangy, not too sour, and the crust and chew were perfect.  I brought half of the loaf in for my co-workers to try and they enjoyed it every bit as much with a slather of my homemade blueberry jam.

If you happen to be a bread baker who's ready to take the next step, I encourage you to try Bridget's sourdough starter method and the no-knead sourdough bread recipe.  It's an incredibly satisfying achievement to take that first bite of something you truly made from scratch, with nothing but a little flour and water and a whole lot of time and patience.
Posted by Justin at 6:00 AM