Turkey Galantine - aka A Boneless Whole Bird with Stuffing 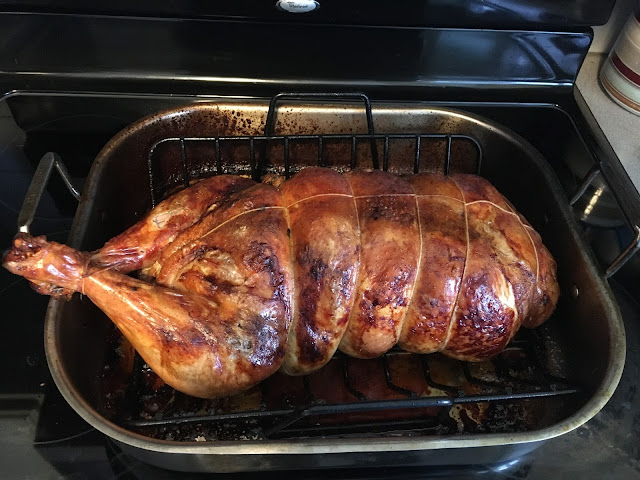 Every so often, I like to do a more complicated food project, just for fun.  This Easter, I wasn't hosting the actual event...just contributing a main dish, so it seemed like an opportune time to tackle such a project.  So I decided to debone a whole turkey, pack it full of stuffing, then roll and tie it back up into a bird-like shape.

Sound crazy?  Maybe.  But let's take a step back for a moment...

I first saw this technique about a year ago on an old PBS Special, Cooking in Concert, with Jacques Pepin and Julia Child.  If you've never seen the two of them cook together, it's a real treat.  They had a great friendly relationship kind of like an old married couple and they liked to jab at one another and crack jokes.

Jacques is, of course, a bonafide trained French Chef (he once served as private Chef to Charles De Gaulle) and Julia is...well...Julia.  But nobody can beat Jacques' knife skills (except maybe Martin Yan, but I digress).  So in this particular episode, they decided to have him demonstrate how to debone (or as he calls it, "bone-out") an entire chicken in under 3 minutes using nothing but a paring knife.  Julia timed him with her watch--all the while, taunting him.  Once he'd finished, she walked to the back of the set, pulled something out, then unceremoneously plopped a 15-pound turkey on the board and asked him to debone it.  The audience laughed.


Here's a YouTube video of Jacques expertly deboning a bird:

Anyway, I found that episode so inspiring because he made it seem so easy to take the entire carcass out of a bird, fill it with something tasty, then roll it back up jelly roll-style and roast it.  Of course, it takes a lot of practice to be able to do it as cleanly and easily (and fast) as he can, but it was fun to try.

Fast-forward to this Easter.  I decided I needed a challenge and I'd just finished reading Jacques' auto-biography and I was reminded of that Chicken Galantine.  I knew just what I was making.

First, I purchased a 15-pound bird.  You don't really want to go any bigger than that or it'll take forever to bone-out and cook.  In fact, I'd go smaller like a 12-pound.  Watch Jacques do it a few times and then get out your sharpest paring and boning knives, roll-up your sleeves, and get to work. 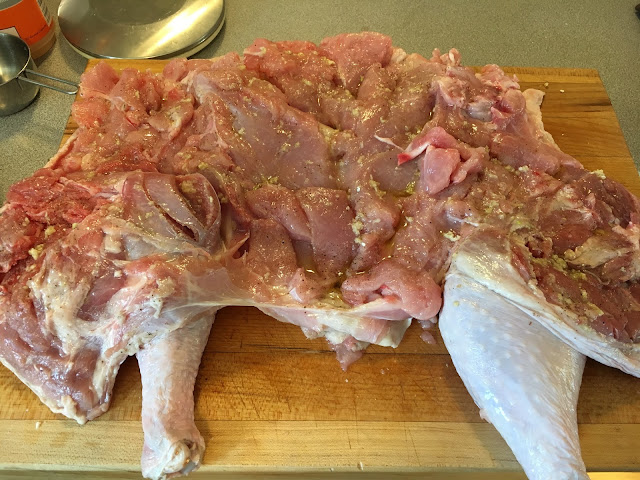 Above is a turkey minus its bones with the exception of the drumsticks, more or less done with Jacques' technique (I didn't re-watch it beforehand, so it was a bit harder than it maybe would have otherwise been, but I succeeded.).  For flavor, I generously coated the meat with some olive oil, salt, pepper, and crushed garlic. 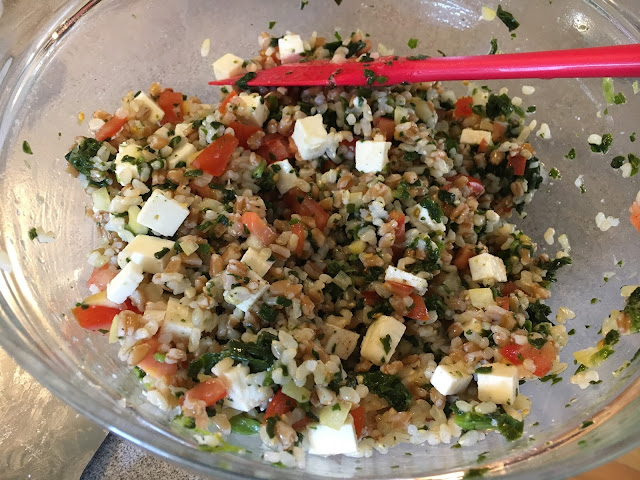 The filling I chose is made of 50/50 farro and short-grain brown rice, chopped drained spinach, finely chopped preserved lemon, chopped fresh tomato, and cubes of feta cheese.  If I had to do it again, I'd add an egg to bind it a bit and allow the bird to stay together in nicer slices. 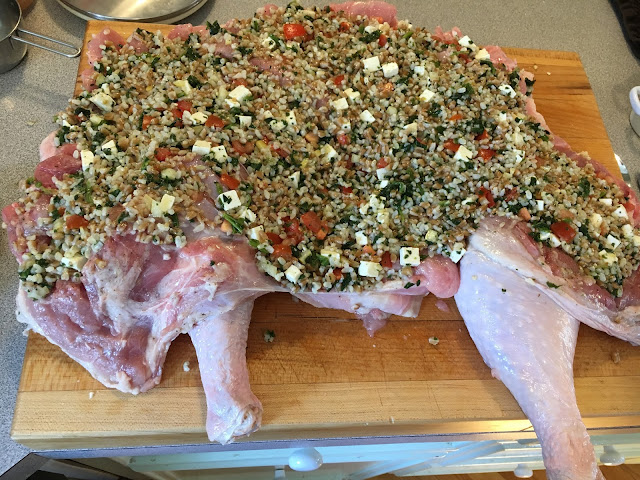 Fill it up, though not too thick or it'll just push out.  Roll it, then tie it like a roast. 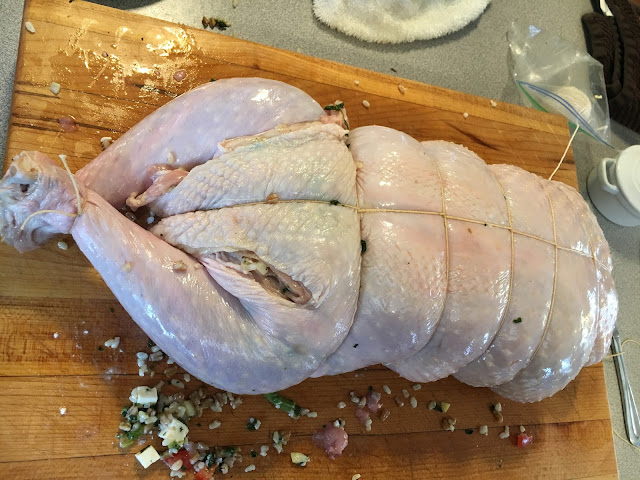 Coat generously with butter, salt, and pepper and roast it at 425 degrees until it reaches 160 degrees in the center.  Remove it from the oven and let rest, tented with foil for 15-20 minutes (the temp should coast to 165).  Remove the legs and string and slice as best as you can for serving.  If all goes well, it'll look like slices of jelly roll.

Overall, this was a delicious experiment.  Chickens are definitely easier to do and hold-together better, but the turkey was quite impressive coming out of the oven, so there's a trade-off.  And this stuffing was absolutely delicious.  I'll probably be using variations of it in the future for other purposes.