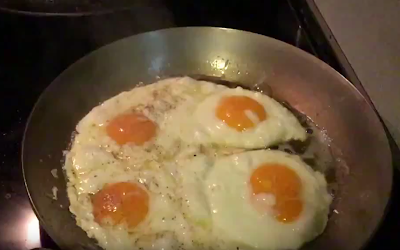 About 6 months back, there was a lot of hub-bub on the web and in various food media about Carbon Steel (sometimes called Black Steel) pans.

Carbon steel pans are nothing new, actually.  Traditional round-bottom woks are carbon steel and many commercial kitchens use carbon steel saute pans.  Carbon steel has also been a beloved material for chef's knives, though not so much in the home kitchen because it tends to turn a blotchy black-brown color.  But for some reason, carbon steel became visible to the home cook and suddenly, everyone was talking about them.

If you've never seen or worked with one, it's a heavy-gauge steel pan, often with a long steel handle (instead of plastic or silicone).  New, they have a dull gray polished finish.  Once well used and loved, they develop a dark black patina of carbonized polymer that's virtually nonstick, just like your favorite cast iron pans.  The difference is that they're lighter and thinner than cast iron, allowing you to do much of the same things you do with your trusty nonstick skillets like flipping the ingredients around or pouring them out onto a plate without the use of two hands (depending on how large your skillet is).

Interested in this new fad, I put a large one on my Christmas list and sure enough, Santa Claus came through and put this one, recommended by America's Test Kitchen, under my tree.  Around the same time I received mine, I happened to hear a podcast segment on Local Mouthful about how to season, use, and care for them.  There was also quite a bit of advice being put-out by Milk Street, including one tidbit about heating oil in it and discarding the oil before adding new fat to cook with.

So what's the verdict?

After using my pan for several months, I'm happy to report that it works well and has all but replaced my nonstick (ceramic or Teflon-coated) pan.  However, it wasn't without quite a bit of trial, error, and some frustrated fowl language.  Here are my thoughts on the matter:

This pan was by far more difficult to season than even an unseasoned cast iron pan.  With cast iron, you can jump-start the seasoning by generously coating the pan in vegetable shortening, placing it upside-down on the rack of your oven, placing a tray to catch drips on the rack below it, then removing the smoke detectors (an important step) and cooking the crap out of it.  Wash, rinse, repeat until you have a nice initial layer of seasoning.   You can also roast-up chickens and fatty meats in it.

With the carbon steel pan, not so much.  I tried this method and all I got was a pan coated in a sticky, blotchy mess.  I then had to get out a steel-wool cleaning pad (Brillo or SOS) and scrape all the gunk, goo, and blotchy seasoning.

I also tried this method with the potato peels, which is endorsed by America's Test Kitchen and also came on an instruction card with my pan.  I can't say it worked particularly well for me, but I didn't have standard brown potatoes.  So that may have been a factor.

Unfortunately, the best way to season this pan is to use it and baby it.  The advice Milk Street gives of heating it with some oil, discarding the oil, then adding fresh oil to cook with goes a long way towards this process.  When you're done, immediately scrub it with soap and water, heat it again, and rub a thin layer of oil on it...preferably flax seed oil.  Let it heat a bit more til it smokes, buff out the finish, then store.  If you do this for dozens of uses, it'll gradually build-up a nice seasoning.

I'm not going to lie.  This pan is going to look ugly for a very long time before it gets to that nice dark patina all over.  For some reason, it seasons in a very blotchy way, so you get areas where it looks like you've damaged the pan and areas where it still looks new-ish.  Keep at it and it'll eventually all start to blend into a muddled brown/black.  But it might take up to a year or so.  Mine still isn't there, yet.  I do think part of this problem is that I have a glass-top electric stove and the pan heats very unevenly.  If you have gas, you may not have as much of a problem with this.

I think the turning point was when I realized that this pan is not nonstick on its own.  You can't just spray it with cooking spray, toss in an egg, and fry it up like you can with Teflon.  This pan works in conjunction with a fair amount of oil to provide its nonstick properties, even after it's fairly well seasoned.  Check-out this video I did early on of eggs sliding around on a nice thin grease slick.  I don't think I could do this even in my best-seasoned cast iron pan or my Teflon pan.

What it DOES do over time is start to release caked-on gunk easily when being washed.  For example, I often make "cheesy eggs" for the family (scrambled eggs with American cheese melted into them).  If you've ever made these, you know that the cheese and egg protein bakes-on hard to the pan surface...even Teflon and needs to be soaked to get it off.  Once my pan had been sufficiently seasoned, this is what it looked like after cooking a batch of 6 eggs with 3 slices of cheese in them: 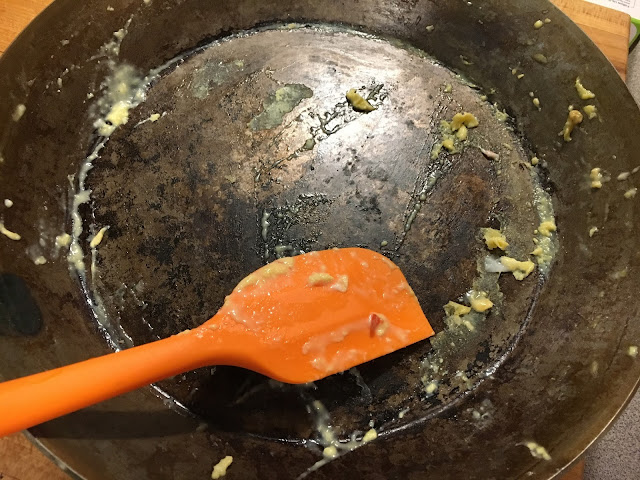 Not a lot of soaking or scrubbing to be done there.  I like to use one of these blue Scotch-Brite scrubbing sponges, which are specifically made so they won't scratch Teflon coatings.  They don't scratch my hard-earned seasoning, either.  Any regular dish soap will work fine as long as you don't use an abrasive scrubber.

Be sure to dry the pan well and re-season often (using the oil, heat, buff method above) before storing.  If you don't dry it well, it will leave rusty rings on whatever surface you put it on, which isn't good for your pan or your counter top.


What Not to Do

One of the selling points of carbon steel is that it can safely go from stove top to oven.  While that's technically true, I wouldn't recommend doing it with anything that has a sticky finish or anything that will overbrown on the bottom.  I did it with a honey-based glaze and I ended-up ruining my finish trying to get it off and had to re-season the pan all over again.

If you're going to use carbon steel in the oven--especially before it's entirely black, stick to thin pieces of meat, fritattas, and other things that will be in there a short time and don't have a lot of sugar.

The bottom line is that I have grown to love this pan.  It takes some getting used to and a bit of finesse to get it seasoned-enough to work with, but once you get it right, you'll love it and keep reaching for it over and over again.

Disclaimer: I'm now a member of the Amazon Associates program, in which Amazon will share a small portion of their profits with me if you buy anything on Amazon from one of the above links.  All of the products I've linked to, I've purchased or received as a gift and my opinions are my own.  I fully support your seeking-out a local source for all items, but if you do choose to purchase from Amazon, it helps support this blog and I thank you.
Posted by Justin at 5:31 PM