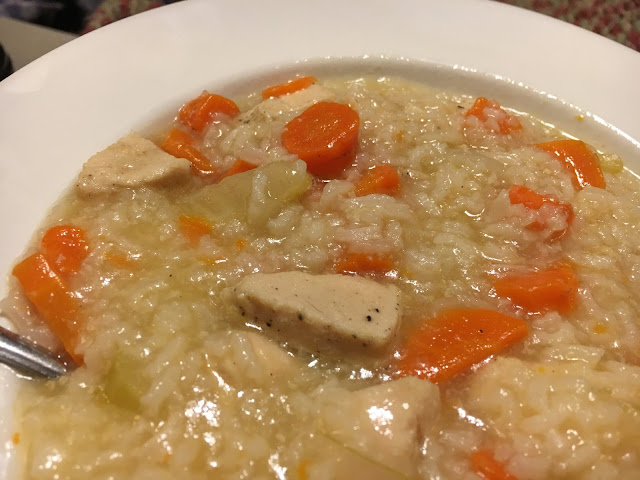 The other day, I decided I wanted a "dump and cook" chicken soup that could be done in the Instant Pot™.  My wife suggested chicken and rice, which was a great idea, since rice normally cooks great under pressure (and in no time at all).

I'll admit the first attempt wasn't perfect.  For reasons I can't explain, I decided to let it release pressure naturally, even though I know very well that rice is a quick-release ingredient.  I also added way too much rice.  The result was mushy and thick, but nonetheless delicious.

The recipe below makes corrections for those two mistakes.  I haven't actually tested it yet, so I present it with caution, but I'm pretty sure it'll work just fine.

Note: This recipe uses white rice.  It can be done with brown rice, but the cooking time would need to be longer (about 20-25 minutes).


Instant Pot™ is a trademark that I use and mention without permission from the trademark owner.  Most of my Instant Pot™ recipes can be made in any similar multi-cooker or a stove-top pressure cooker, provided it can handle the settings described in the recipe (typically, high pressure for a designated amount of time plus saute/browning).
Posted by Justin at 11:43 AM