The Post Where I'm All Excited About Hot Water

I'm going to take a few moments to gush about a new kitchen fixture I splurged on.  You see, I'm a tea drinker, and something I've always wanted is one of those instant hot water spigots you can add to your kitchen sink.  Not a pot filler...this is designed to pour near-boiling water from a spout as you open the tap.

Recently, my regular kitchen faucet (which was a temporary hand-me-down 9 years ago anyway) kicked the bucket.  I've never much liked the old scratched, rusting, gray-enambled cast iron kitchen sink and the way it was installed, it's nearly impossible to reach to install a new faucet anyway.  So I decided it was time to just spend the money and put in a new sink.  And since I couldn't have my dream sink (an apron/farmer's sink) without renovating the entire kitchen, I was at least going to put in my hot water spigot.

And here's the whole thing completed: 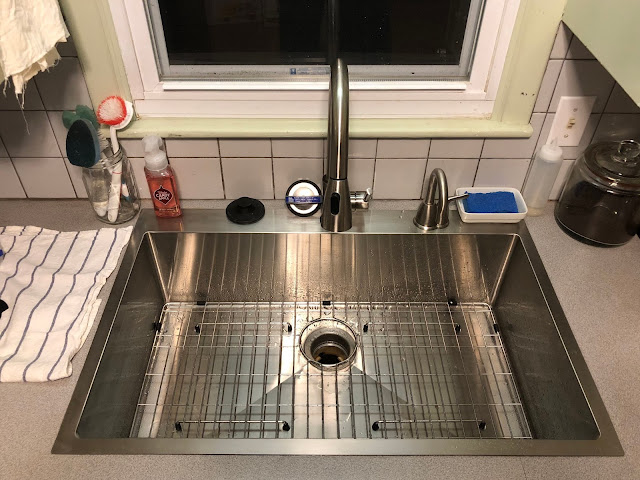 Isn't it great?  It's HUGE...like my 6 year old daughter could take a bath in it, huge.  We prefer a single-bowl sink over a dual-bowl.  I simply put a small dish pan on one side so that anything collecting in the sink is out of the way and I can still use the disposal.

Off to the right, there, you can see my new fancypants hot water spigot.  Just turn that handle and I have an instant cup of hot tea.

In case you're interested, here are the products used:
Let's talk about my thoughts on each of the products, shall we?

The Sink
I chose this sink because I wanted a single-bowl sink and the description included dimensions that assured me it would fit in my existing hole (I wasn't replacing countertop in this project).  Also, I liked the squareness of it.  While it does look a little industrial, I just felt it looked better and sturdier than a "contractor-grade" sink you might find at the home center.

So far, I've been impressed with it, but there are a few caveats:

The Faucet
I was a little skeptical purchasing a no-name faucet, but the high star rating for this one was well-deserved.  There are no plastic "brushed nickel" pieces.  They're all actual metal.  It assembles easily and feels sturdy.

There was one small downside.  In the photos shown on Amazon, it shows the handle on both the left and the right, indicating it can be placed where you want it.  Turns out, it's actually a left-sided handle.  If you place it on the right (which is where my old one was), it reverses the water so that hot is down and cold is up.  I didn't want anyone burning themselves, so we just reversed the hoses under the sink.  Because the blue/red color indicator is also facing the wall, nobody will read it and choose the wrong one.  However, the lever does hit the wall since the "down" (which is now up) goes down further than the other direction.  Again, not a huge deal breaker.

The Hot Water Dispensor
Overall, I love this thing.  Seriously.  I use it to make tea.  I use it to fill small pans of water to give them a kick-start heating (the tank only holds 3/4 of a gallon, so you're not going to use it to fill a stock pot).  I've used it to get stuck-on bits off of plates quickly (like the cat's bowls).  And I frequently use it for other cooking tasks like pouring water to soften the sealing compound on canning lids or adding water to soups or to the Instant Pot.

While I love it and will never be without one again, I do want to point out a few of its faults and design flaws:
The Dish Pan
Let's be honest.  This is expensive for a dish pan.  However, I've had other dish pans and I don't love the way they hold-up over time.  This one looked sturdier and I liked the square, tall shape, as it'd take-up less space in the sink (I leave it there to collect dirty dishes when the dishwasher is otherwise occupied).  It also had the drain feature, which was intriguing and might prevent stagnant water from getting trapped.

Overall, I'll say it's worth the money.  The only part that could use some improvement is the drain.  It has a tendency to close itself somehow.  I wish they'd add a little friction to it to keep it where you put it.
Posted by Justin at 4:46 PM